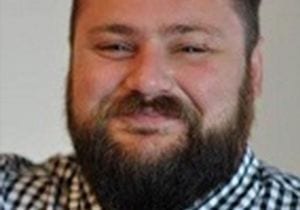 He was kind, funny, generous, humble; and always saw the best in people.

Tom ‘Moose’ died unexpectedly this summer age 29, having lived with epilepsy since he was 10. His mother, Lee, and friend and colleague, Mike, talk about Tom’s life and the enormous positive impact he had on all those who knew him.

Tom was a much-loved son, brother, uncle, grandson, nephew, colleague and a dear friend to many. He was a big character, with a big presence and an even bigger heart, always giving time to those around him. He had a great passion for his family, socialising with friends, live and recorded music (especially on vinyl), film, TV and cooking.

He gained the nickname ‘Moose’ when he was 16, following his GCSE’s. Tom and his friends visited Newquay to celebrate, and on meeting a group of northerners, they created northern versions of their names. Thomas became Moose, and was known by this name by friends and family alike ever since.

Before gaining his degree in Media Studies from Derby University he travelled around Australia and Fiji. On returning to Southend he started volunteering and then working at Southend YMCA. He undertook many roles at the charity, including launching youth homelessness fundraiser ‘Sleep Easy.’

Housing and the issue of homelessness amongst vulnerable youngsters soon became another passion for Tom as he recognised the huge need in the area for suitable accommodation. He worked to fundraise and increase the housing provision for young people in the Southend area, overcoming many challenges during the process and became something of an expert on the subject.

He was kind, funny, generous, humble; and always saw the best in people.

Tom was diagnosed with epilepsy aged 10 following a head injury after falling from his bike.

Although no direct link was ever confirmed, his first seizure presented approximately 3 weeks after the fall. Up until the age of about 23 Tom’s seizures were relatively well controlled on carbamazepine but as they became more frequent and less well controlled lamotrigine too was added.

Tom never wanted to be treated differently and never made a fuss even when he’d been unwell, never allowing his condition to let him live anything but a full life. Tom was embarrassed by his condition and only told people on a ‘need to know’ basis as he did not want to be treated as ‘special’.

Tom did not learn to drive as he never achieved a fit-free year and he had to be careful not to attend clubs where strobe lighting was used. Bedside furniture needed to be moved away from his bed to avoid head injuries, and bathroom locks removed in case Tom had a seizure in the bathroom. All the family became hypersensitive to any noise that may have indicated that Tom was having a seizure. As Tom grew into adulthood and went off travelling and to university, I as his Mother had to learn to “let go” and not make each focus of our long distance conversations about his health and allow him to make his own decisions about how best to manage his condition. This was difficult and caused me much stress and anxiety.

Tom died in July of this year, 2015, aged 29. Friends and family are doing all we can to raise money to help Epilepsy Research UK and Southend YMCA continue their great work and maintain Tom’s legacy; including marathons, creative challenges, mountaineering and events.

Tom worked closely with Shoeburyness High School as Sleep Easy Co-ordinator. Students at  the school have chosen to support the two charities with a dedicated Sleep Easy event on 16 October 2015, and Charity Week, 19-13 October 2015, including a fancy dress day, talent show, other competitions, raffles and various sponsored events taking place throughout the week.

We feel that epilepsy charities and research are very much underfunded considering the huge impact that the condition has on so many people’s lives. We would like to see a greater understanding of what living with epilepsy is like. Increased awareness will help demystify the condition and remove the stigma that some people still associate with epilepsy.

Mike, one of Tom’s close friends says: “For me, in the time since Tom passed away, I’ve learnt even more about the condition due to fundraising for Epilepsy Research UK. Naturally as a friend of someone who had epilepsy I strived to learn more about it and see if there was anything I could do, but because of how complex it is, how many different ways it can affect someone and how little is known in comparison to other conditions, I am constantly developing an understanding and want to help others to raise awareness too.”

Our thanks go to all of Tom’s family, friends and colleagues at Southend YMCA, and students at Shoeburyness High School  for the extraordinary contribution they are making to raising awareness and funds for the work of Epilepsy Research UK and Southend YMCA in memory of Tom.

You can read about the fundraising journey Tom’s family and friends have embarked on at www.rememberingmoose.co.uk, which includes more information and photos about Tom’s life, and are welcome to contact them via the website. To donate directly in Tom’s memory please go to www.justgiving.com/rememberingmoose.