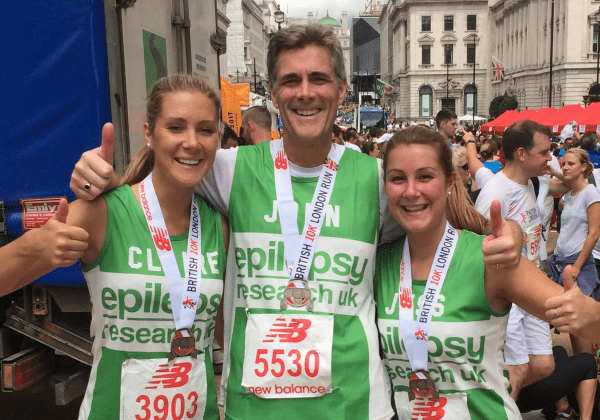 I felt strange and not quite right.
I felt clammy and I knew
that I was going to fit

John Greenaway was diagnosed with epilepsy in 2007, and his daughter, Claire-Louise, was diagnosed soon after in 2009. Jessica, John’s other daughter has not yet had a formal diagnosis but she has experienced similar symptoms to her sister.

John Greenaway has two daughters. He was diagnosed with epilepsy in 2007. His daughter Claire-Louise was diagnosed in 2009 and his other daughter, Jessica, has not yet had a formal diagnosis but has experienced symptoms similar to her sibling. This is their story.

John had his first seizure on a Valentine’s Day trip to Rome. He and his wife Diana were just off to visit the Vatican when he felt “unwell”. He had a seizure which lasted for 15 minutes. Five minutes later he regained consciousness. He was taken to hospital where all the EEGs and MRIs were clear. On his return to the UK John had the tests repeated and once again the medical profession could not confirm that he had epilepsy, although they thought that this was likely. He was prescribed sodium valproate. At this stage John was unaware of any family history as neither of his parents had the condition. In August 2008 he had his second seizure. Again “I felt strange and not quite right. I felt clammy and I knew that I was going to fit”. It was at this point that he checked with his parents again to see if there had been any instances of epilepsy in the family. They now admitted that his brother had in fact been diagnosed with epilepsy but they had kept it quiet out of choice. Follow up investigations at the Charing Cross Hospital revealed nothing untoward and on visiting a neurologist at Imperial College in 2009/2010 John was advised to continue with the medication but reduce it slowly over time. This he has done assiduously and is now on just one tablet a day and has not had a seizure since.

In terms of any warnings, John says that he “just doesn’t feel right. I get hot and clammy and experience a ‘faint feeling’ as if I am not quite there. It is a sort of premonition, the sense that something is about to happen.”

John is extremely open with his work colleagues. He has briefed everyone with whom he works so that they know what to do should he be taken ill. John has also distributed information in newsletters around the department that he works in, in an effort to raise awareness of this ‘hidden’ condition. He has found everyone to be incredibly supportive and they regularly sponsor him on his charity fundraising runs.

John feels that “research is really important: like with anything, are we ever going to get a cure for cancer? Or epilepsy? And with epilepsy, maybe it is just a case of controlling it? But in many ways I feel it has made me a better person as it has given me a reason to do something and hopefully make it better for others. It has given me a focus. I want to put something back. People have helped me so I want to help others in return”. Luckily for John, he experiences no side effects from his medication although at the beginning if he had a glass of wine he seemed to get drunk very quickly, which provided some very good family entertainment, but now he seldom has such a problem. His diagnosis (generalised major tonic-clonic seizures) has not curtailed his life in any way. In fact, John believes that he now does more exercise and keeps fitter than he ever did as he is constantly training for one event or another.

His daughter Claire-Louise was diagnosed when she was 21. She had been working long hours since starting a graduate job in investment banking in September 2008 and perversely things had relaxed a bit at the beginning of 2009. She popped out of the office during her lunch break and whilst walking down a busy street remembers that she felt that she needed to either have a drink or to sit down. She then woke up in an ambulance on her way to University College Hospital. “I was embarrassed at all the attention I was getting and just didn’t want to make a fuss”. It transpired that Claire-Louise had fallen to the ground and been found by a stranger who had summoned the ambulance. Somehow, although unaware, Claire-Louise had texted her boss to say that she’d fallen over and bumped her head and was on her way to hospital. In fact she had dislocated her shoulder and cut her head which left an enormous bump, although her loyal boyfriend told her that he couldn’t see anything! Tests were conducted but no abnormalities were found. At this point it was not concluded that she had epilepsy. Claire-Louise was referred to a neurologist at University College Hospital, but with no abnormal test results and no witness to the episode, she was advised to carry on her life as normal.

Almost exactly two years later she had her second seizure. She was on holiday in Brazil with a group of friends. She told her boyfriend “I feel a bit funny” and could see from the look on his face that something was wrong. She started to look over her left shoulder and shake and her friends, who knew all about her previous episode, made sure that she was safe and stayed with her until a doctor in the restaurant took her to the A&E department next door! A few hours after her discharge she was out clubbing and was hugely dismissive of a friend who declined as he was not feeling well! It wasn’t until her third seizure at a music festival in 2012, when Claire-Louise fell to the floor twitching, that she was prescribed levetiracetam which has controlled her seizures. Like her father, in advance of her seizures Claire-Louise always felt that something was not quite right. “I feel light-headed, I feel like I need to sit down and have a drink. I would sometimes feel hot and tired and would start to rub my hands together.”

The family seem to have taken everything in their stride, carrying on as normal, with an attitude of “if we can’t change it, we’ll just get on with it”. When Claire-Louise was diagnosed she and her father talked about it a lot which was reassuring for both of them as she was able to ask her father of his experience first-hand and she had the knowledge that he had come out the other side. Like her father, Claire-Louise has shared her condition with her work colleagues and in doing so found out that a number of her colleagues have epilepsy too. She feels that the biggest worry for those with epilepsy is the unpredictability, the “not knowing if and when you might have your next seizure”. She is frustrated by the medical world’s “lack of understanding of the condition and its cause, as this could lead to earlier diagnosis and possibly even prevention”.

Jessica has never seen her father or her sister have a seizure, and it was only sometime after their diagnoses that she realised that the condition could be more serious than she had initially thought. As far as her experience is concerned, Jess has fainted many times: every two weeks or so she has dizzy spells and the symptoms seem to go away if she sits or lies down. However her most worrying episode was in the US when she was shopping in a supermarket. She knew something was wrong. She felt dizzy and needed a drink. Then she was aware that her eyes were rolling back in her head but she kept pushing the trolley trying not to worry. Jessica said “I knew I was feeling strange, I felt hot and dizzy, and I kept weirdly touching my nose to almost reassure myself I was still awake”. A fellow shopper asked her if she was OK, at which point she fell forwards into the trolley from where she was lifted to the floor and remained unresponsive for 5 minutes until the paramedics arrived. Tests were all OK and apart from an aching body, she felt fine and was discharged. Following Claire-Louise’s diagnosis, Jessica has always felt that she “would be next” as she always fainted as a child and it still continues to happen. Whilst Jessica has had no formal diagnosis, she is careful to carry water with her everywhere, and snacks either rich in iron or high in sugar to keep her going. She has told all her work colleagues and friends in case something does happen in the work place. Because of her family’s experience she has the attitude of “thinking it’s a really big thing and it really isn’t”. Jessica feels that “it is good to bring attention to the condition. It doesn’t stop my sister and father from doing anything – they just take the medication; not in any way do they live their lives differently, which after they were first diagnosed, I was worried about, but not any more.”