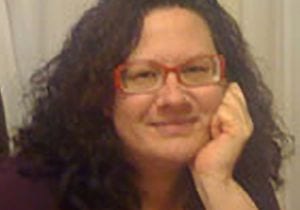 You’ll be alright, you’ll feel better soon – is what my mum was told

Sue’s mother has had epilepsy since childhood, but it wasn’t diagnosed until she was in her fifties. Here Sue talks about her mother’s experiences and the impact her epilepsy had on family life.

“Mum was born in 1934 when very little was known about epilepsy. Her mother loved mum very much, but she didn’t take her to a doctor because each visit cost half a crown – “You’ll be alright, you’ll feel better soon,” is what my mum was told.

Circumstances at home meant that my grandmother had to go to work, leaving baby mum in the care of her siblings who were eight, six and five years old. In childhood mum had two head injuries, which she is told may have contributed to her developing epilepsy. Aged nine months she was sat on the sewing machine table by her eldest brother and fell off, taking a nasty bang to the head. When mum was four, she was knocked on the head by a swing and can still remember the pain.

At Grammar School mum couldn’t concentrate effectively, often felt unwell and was put to bed in the sick bay. P.E. was difficult; she ran up to the vault pommel horse, but felt too unwell to jump it. The school implied her mother wasn’t feeding her properly, which wasn’t the case.

Mum worked in an office when she left school. She travelled by train from Edmonton to Liverpool Street Station. Every day her hair and clothes were splattered with coal dust from the steam train and smog. On the way home she had three flights of stairs to walk down at Edmonton station and frequently came close to collapsing, feeling nauseous and disorientated. “It was like a far away feeling,” she tells me.

When mum was 23 she met Dad. “She seemed alright when we first got married,” he told me. “(She) went to the doctors now and then feeling unwell, but he didn’t know what the problem was. Mum used to go and meet your sister for lunch when she started work. They’d say goodbye and mum would be in a terrible state not knowing how she would get home to cook my tea. She had to sit, then walk a bit, sit again until she got to the bus station.”

Mum’s epilepsy wasn’t diagnosed until she had neurological investigations following a confirmed stroke when she was fifty-seven and the term ‘latent epilepsy’ was used.

Mum’s epilepsy is controlled by drug therapy. She takes many different medications including Aricept for Alzheimer’s disease. Mum and Dad do not question the doctors or ask for a medication review, or even ask about treatment or the exact type of epilepsy mum lives with. It almost seems to be accepted that mum’s just not very well.

Mum has petit mal seizures. She possibly has photosensitive epilepsy because flickering and flashing lights affect her and will bring on a seizure. My children cannot play their computer games when mum is in the room. Being in a car at night on a motorway brings on seizures due to the rushing headlights, as does missing a dose of Epilim or taking it late.  Mum finds theatre and cinema difficult and never learnt to drive. Mum is aware of a feeling before the absence occurs. During the episode she experiences a severe and intense pain in her head. Mum doesn’t recover quickly; she needs to sleep afterwards until the pain subsides.

Dad and I have always been able to tell when mum is experiencing a seizure. Something happens to her eyes, whether it is the pain that causes them to look different or electrical activity in the brain, I do not know. Her eyes look pained and heavy; she still blinks, can still have eye contact, can still see, can’t read, look at the television, or focus on a specific task.

In the last year my sister has begun to recognise when mum is feeling unwell or ‘the epilepsy’ is happening. Dad has cared for mum for 25 years, taking early retirement the year after she had her first stroke and he is the person who knows her best.

Dad and I talk about mum being unwell. The burden of caring for mum is becoming increasingly difficult for him. He is adamant her epilepsy has not affected him or family life. It probably has, a little.

Epilepsy is experienced differently by different people. What matters is that individual needs are addressed. People live with many conditions and we all hopefully find ways of coping. The person with the condition has to be in control of how they live with their difference. Privacy, dignity, independence, choice, individuality, rights, respect, and self-esteem are paramount. Research into epilepsy must continue. We need to know exactly what happens when a seizure takes place.

No-one else in my immediate family has epilepsy but we are very aware of how it can affect family life.”