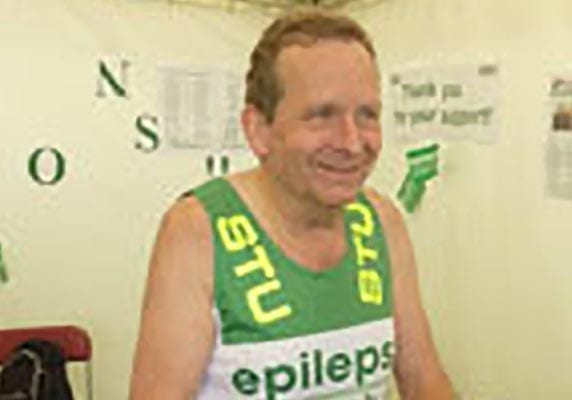 Five years ago, at the age of 56, Stuart was diagnosed with ‘migraine-induced epilepsy’ following an episode at work when he had a seizure and fell forward, narrowly missing a colleague but cutting his head on the edge of a bench.  None of his colleagues knew what to do but called an ambulance – largely because of the injury to his head, which required stitches.  His wife, who at the time worked only five minutes away from Stuart’s place of work, was called and arrived at the same time as the ambulance.  Stuart was taken to hospital and following investigation, and piecing together of his medical history, he was diagnosed with epilepsy.  It transpired that Stuart may have been having infrequent night-time seizures that had never been properly diagnosed.

Stuart has a history of severe but infrequent migraines and believes that his first epileptic seizure may have taken place in 1994, when he remembers retiring to bed at about 10 pm at night with a really bad migraine.  He subsequently woke up at about midnight and was unaware of what was going on around him. He was taken to hospital and essentially lost a whole day while he recovered and regained awareness of his surroundings.  This sequence of events happened three more times during the intervening years, with the last episode in 2002, but no-one could decide on a diagnosis until the seizure which took place in October 2009 at work.  Stuart lost his driving licence for a year, but he was not prescribed epileptic medication as it was decided that the episodes were too infrequent to merit this course of action.  However, although his migraines are not always associated with seizures, he was prescribed Sumatriptan to control these and hopefully avert a possible epileptic episode.  Stuart always has this medication to hand.

Thankfully Stuart has been seizure free since, but he is realistic about the future as he knows that it will happen again, although not when.

Stuart has chosen to tackle his condition head on.  He is courageous and upfront about his epilepsy and always makes sure that people know about his condition so that they know what to do and are not taken unawares should anything happen.  Following his diagnosis “Many tears were shed initially and depression was a ‘thing’ to fight, then afterwards it was the realisation of the limitations”.   For the first few weeks Stuart consciously tried not put himself in the way of danger, for instance, deliberately walking away from the side of the road.  Now if Stuart travels, he is never on his own; he wears a MedicAlert bracelet; he always takes a phone with him when he is out of the house; he carries emergency phone numbers and useful contacts and information in his wallet.  In general Stuart has found the diagnosis, not so much the condition, very restrictive in a lot of ways.

He lost his driving licence for a year, which meant that not only did he lose his company car, but his wife, friends and family had to become his chauffeurs.  Stuart now has his driving licence returned, but sadly, the company car was lost forever.  He was also told not to ride a bike for three months but managed to overturn this decision after 2 months.  Epilepsy has affected him “in many small ways, but I don’t notice now, I get around it”. “I still have to live with the fact that the Specialists have said it will happen again but they don’t know when or where”.

In other ways though, as Stuart himself says “I haven’t let it restrict me in anyway.  It’s about living life for the day”.  He still runs marathons (and is taking part in this year’s Virgin London Marathon for Epilepsy Research UK); he has completed the notorious ‘tough guy’ challenges three times, where he coincidentally had a paramedic on the team!  He has completed an ultra marathon and rides his mountain bike competitively.

In terms of what Stuart would like to see for the future, he believes passionately in the need to increase awareness of the condition and that “research is definitely the way to improve the lives of those with epilepsy”.