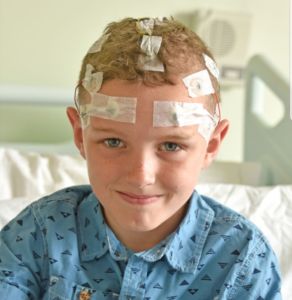 Oliver underwent surgery in the summer of 2018 to help control his seizures. His father Steve has kindly shared their story.

Oliver’s condition was first noticed when he was at nursery, where they thought that his behaviour was attention seeking. However, over time, Steve and the family realised that something just wasn’t quite right, so they took him to the local family doctor. The doctor too realised that Oliver needed further expert evaluation so he was referred to a neurologist for a proper diagnosis.

As a result Oliver was prescribed antiepileptic medication and over the next four years or so, he had numerous investigations: blood tests, MRI scans and EEGs. Specialists analysed all the data from these investigations and took into consideration the fact that the medication wasn’t working, concluding that the only option available was for surgery to treat Oliver’s condition.

In mid-June of last year, 2018, the surgeons operated on Oliver and removed his hippocampus, which Steve tells us is roughly the size of a little finger and is located deep within the structure of the brain.

Immediately following the operation Oliver experienced a lot of pain in his jaw and was suffering from a lot of headaches, but slowly things started to improve. And now, following this major open brain surgery, Oliver thankfully is recovering well and has been free of any seizures since the date of the operation.

Steve has nothing but admiration for the surgeons, adding ,“they have done an amazing job at Kings Hospital and Oliver has no side effects.”

And only a couple of weeks ago Oliver found fame in Los Angeles featuring in a special epilepsy display at an art show which aims to help raise awareness of epilepsy. Congratulations Oliver – great job!