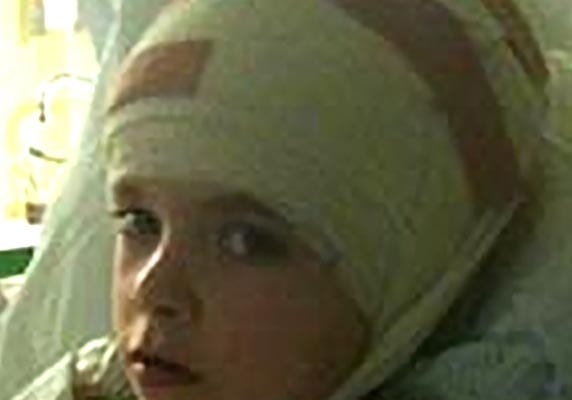 “We started noticing that Rachel was having periods where she went completely vacant and would tense up and almost shutdown. These absences varied in duration from a few seconds to as long as 10 minutes, during which time she would lose her hearing, speech and awareness. If she was in the midst of doing something she would fall over or just curl up into a ball. As a result she required constant supervision for fear that she would have a seizure and injure herself.

Rachel was diagnosed with epilepsy at the age of 3 and put on medication.  Some drugs made her puffy and bloated; others made her slow and confused, but they didn’t stop the almost daily seizures which hampered her development.  After two years of excellent care at our local hospital we were referred to Great Ormond Street Hospital (GOSH) in London, where a team of neuroscientists, researchers and doctors worked tirelessly to find out what was causing Rachel’s specific kind of epilepsy. After many appointments, tests and stays at GOSH Rachel was diagnosed with benign occipital epilepsy and the team identified a specific area of tissue within the occipital lobe as the cause of the seizures. Ultimately they advised us that they were confident this piece of tissue could be surgically removed, and the seizures would stop. It was a mixed reaction of excitement, hope but also fear when it was explained that a recent breakthrough in research would allow this procedure to be carried out.

In February 2010 a piece of tissue the size of a 20 pence piece was removed from Rachel’s brain and we saw a dramatic and instant transformation in her. Rachel had been quite a subdued and lethargic child up until then, due both to the condition and to the medication, but ever since her operation her personality has changed. She is outgoing, confident and is doing really well at school.  She is the exact opposite of how she used to be – she’s now a happy child, she’s made amazing progress in all aspects of her life and the transformation is incredible.

Since her surgery Rachel has come off all her medication and hasn’t had a seizure since her operation.

Rachel’s successful operation was groundbreaking and only possible because of research partly funded by Epilepsy Research UK, which has led to advances in neuro-imaging and surgical techniques.

Nick, his family and friends now regularly raise funds for Epilepsy Research UK having seen first hand how much epilepsy research can transform lives. Nick is also keen to raise awareness of epilepsy to encourage more people to support the charity. He adds:

“A lot of people don’t understand epilepsy. When Rachel had a seizure in public people turned away and didn’t know how to react. I’ve met people aged three to 93 with epilepsy; it is a common condition – far more common that people realise – and I think it would be great if more people had a better understanding of what it is. It is only really when it affects your life that you realise just how crucial research into the condition is.”