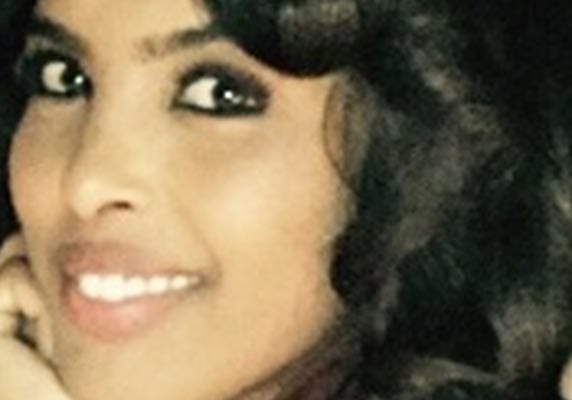 Life doesn’t stop because
you have a seizure

Hamsia, 29, was diagnosed with epilepsy at the age of 17. For years she couldn’t accept her condition, but now she’s ready to share her experiences to help others.

Hamsia is now 29 and was diagnosed with epilepsy at the age of seventeen. She comes from a very close-knit extended family. Although born in Somalia, she has lived most of her life in the UK. For many years Hamsia fought against her diagnosis but having now been able to accept it she wants to share her experience in order to help others. Above all, she wants to tell people that “Life doesn’t stop because you have a seizure”.

Hamsia was a very happy child; she had a ‘normal’ childhood and there was no suggestion that she would, later on, develop epilepsy. She worked hard at school and was a high achiever. She enjoyed reading, storytelling, and poetry, but especially drama, the arts and theatre. Hamsia dreamt of going into stage management.

She remembers her first seizure very well. It was Ramadan, she was 17 and the family were fasting. She didn’t feel quite right and complained of a sore throat and a cough. Her sister advised that she should go downstairs to make a honey and lemon drink. The last thing Hamsia remembers is opening the cupboard to take the honey out, and then nothing. The family later told her that they had heard a clattering in the kitchen. Evidently Hamsia had dropped the honey, the glasses, the spoon, onto the kitchen floor. The family rushed downstairs to find Hamsia experiencing what they later learned was a seizure. At the time they had no idea what was going on.

Hamsia awoke to a crowd of concerned faces, with her Uncle trying to hold her and force her mouth open as it was rigid and clenched. He also tried to straighten her arm which too was rigid, but could not manage, such was Hamsia’s strength. Hamsia started crying and screaming and shouted at her uncle, demanding that only certain people stay with her. An ambulance was called and she was taken to hospital where tests were carried out, including an MRI scan which detected abnormalities in the left frontal lobe of the brain and she was given a formal diagnosis of epilepsy. Up until the moment of actual diagnosis Hamsia had rationalised her experience as being due to stress, exhaustion and fasting but with the formal label of ‘epilepsy’, she broke down.

Hamsia went home but her generalised tonic-clonic seizures (sometimes called grand mal) got worse; taking place every week and often in the morning or evening. She remembers very well a particularly bad episode when she was in bed talking to a friend and had a seizure which made her feel extremely tired so that she had to sleep it off. Following all the tests at the hospital, Hamsia’s GP was informed of the results and her new diagnosis. He prescribed Epilim (sodium valproate). Hamsia did not respond well to the drug. It made her feel low, depressed and just ‘not herself’, “Just not right” as he says herself. From a happy, outgoing, positive person she changed to an angry, frustrated young girl with violent mood swings. She returned to her GP and explained that the medication was doing her no good at all. Her GP was unsympathetic and Hamsia was told in no uncertain terms that “this was the best medication for epilepsy” and when no alternative was offered, she decided to stop taking the medication. She struggled on and went to University. She was still experiencing frequent seizures which left her feeling exhausted, often taking her a week to fully recover. She couldn’t concentrate and noticed that her memory was being severely adversely affected. She was in her first year at university and did not think to ask the university for help. Eventually, she saw a new doctor who prescribed her Lamotrigine, which certainly reduced the seizures but came with severe side effects. Hamsia experienced mood swings, her memory got worse and she didn’t want to go out. After about 7 years on Lamotrigine it seemed to stop working and the seizures started to increase in frequency. She also noticed that her appetite was affected.

By now Hamsia had moved home and was registered with yet another doctor. This time her concerns were listened to and taken on board and the doctor, together with input from Hamsia’s neurologist started Hamsia on a very low dose of Keppra twice a day. In addition, over time Hamsia had become more aware of her ‘triggers’ so she started to manage them better. She ensures that she does not stay out too late; that she eats and drinks regularly and she takes particular care around her menstrual cycle, during which time she knows she is particularly vulnerable, ensuring that she is always with someone who understands her condition. She has also worked hard to relax more, not to get worked up, or over-excited – whether angry or elated! But to live a life with more routine and balance. Although she was still experiencing breakthrough seizures she began to feel more like herself again – positive, upbeat and happy. Hamsia also believes that her memory has improved, but she still needs to write important things down so that she doesn’t forget. At the doctor’s suggestion, her dose was increased and the breakthrough seizures are now less frequent although she still experiences episodes which will leave her with injuries and bruising and feeling incredibly tired.

Since graduating Hamsia has worked in marketing where she wants to continue to develop her successful career. She is rightly proud of what she has achieved as she is aware that she has been through a lot. It is this that drives her to want to help others in her community; to help combat the ignorance that surrounds the condition. As Hamsia herself says “Life doesn’t stop because you have seizures. Talking about it is OK, hiding it makes the situation much worse”. She wants to set up a charity to share her knowledge and experience with others in the hope that they will not need to go through the same ups and downs that she has experienced. Hamsia has found that sharing the fact that she has epilepsy, creating a routine, and a structure to her day, helps her to manage her condition, so her advice to anyone in a similar situation is that people need to find out what works for them.

She now recognises that one of the biggest changes to her situation was when she finally accepted her diagnosis. She finally stopped fighting the ‘label’ and has dealt with it differently which has enabled her to be the person she now is today: happy, positive, looking forward to the future and helping others. Recently Hamsia went 11 whole months without a seizure and she hopes that one day she will be entirely seizure-free.

In terms of the future Hamsia feels that research is important, she feels that better drugs, with fewer side effects, would be a real improvement as each individual is different and what works for one will not necessarily work for another. From her own point of view, better diagnosis is also important; she feels that scans should be done regularly as there are so many misdiagnoses, so the situation should be constantly monitored. She is hopeful for a cure: “If you can cure cancer, I am sure we can one day, with the technology we have I feel we have the chance to cure it one day.” As far Hamsia is concerned, awareness of the condition and information about epilepsy is vital.

As for any advice she would like to give? Hamsia feels because of her own experience, that the doctors have to work with the patients. Doctors should be more aware of the condition and should be better trained to identify the symptoms and know when to hand over to the specialists.