If I thought the cure for epilepsy was at the top of Everest, I’d get there. You’d do anything to help find a cure. That’s what you’d do.

I recently had the great privilege of meeting Gill and Gordon Parry, supporters of Epilepsy Research UK for three decades. Their story is one of overwhelming tragedy – the devastation of a close and loving family. But it’s also the story of enormous strength, warmth and extraordinary generosity.

The Parry’s lost all three of their children. Their daughter Siân and youngest son Mark, both developed epilepsy in their early 20’s. Siân died from SUDEP. She lived alone, Gordon found her. A few years later, David and Mark both developed a rare degenerative neurological disease, Neuroacanthocytosis. The effects of the disease were extremely distressing for them both and for Gordon and Gill. But they were with them all the way; from diagnosis, through treatments, and caring for them at the end of their lives. Siân died aged 28, David at 40 and Mark was 43.

Gill and Gordon have never publicly shared their story but decided it was time to do so for many reasons. They want to continue raising money for research into epilepsy and encourage others to join the fight. They want to inspire researchers to do their very best to find new treatments. As Gill says in the film, ‘If I thought the cure for epilepsy was at the top of Everest, I’d get there. You’d do anything to help find a cure. That’s what you’d do.’ And Gordon, ‘Our hope is that no one, anywhere, will have to go through what we’ve been through.’

What you won’t see in the film are the walls of their home covered in photographs and memorabilia of their children. Siân as a beautiful bridesmaid, flowers in her hair; David playing his guitar in the garden, Mark on his wedding day. You won’t hear the stories of the mischief they got up to as children and young people and their close sibling friendship. You won’t witness Gordon squeezing Gill’s hand when she shares the upsetting moments when she found their sons gone. And you won’t see the playful teasing, love and camaraderie that has clearly sustained them through such terrible and relentless grief. 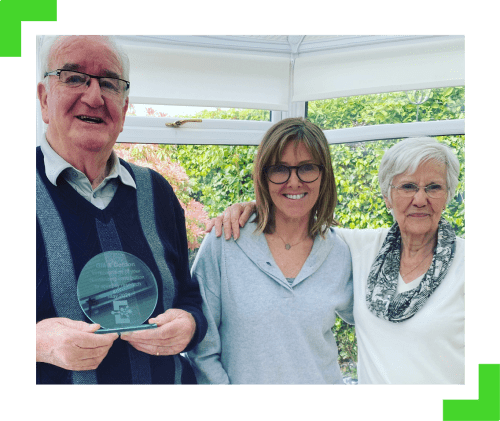 The Parry’s have raised over £100,000 for Epilepsy Research UK. I presented them with an engraved glass plaque as a small token of our appreciation. Their immediate response was to divert attention away from themselves and instead acknowledge their friends, family, neighbours and even Epilepsy Research UK for being such a wonderful and supportive community. And that just about sums them up. Their generosity of spirit, warmth and compassion was humbling.

My visit to the Parry’s has had a profound effect on me. I hope they will inspire you too to help us ‘Get to Everest’.