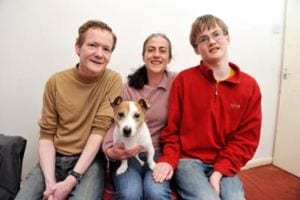 Emma was diagnosed with epilepsy at about 10 years of age, and after trialing one drug she was switched to sodium valproate (aged 15). Emma wasn’t informed of the significant risks of sodium valproate in pregnancy, and as a consequence she had a son who was severely affected.

“I was about 10 when I was diagnosed with epilepsy after having had two seizures, and I was prescribed Phenytoin. My seizures weren’t controlled and I had about two per year (I’m not aware of any triggers). When I was 13 I went 18 months without a seizure, but the frequency increased again and in 1987, aged 15, I was transferred onto sodium valproate (Epilim). The dose was gradually increased to 1500mg a day – 1000mg in the morning and 500mg at night.

I had annual appointments with my neurologist, saw my GP when I had had a seizure and usually received emergency care at A&E after having a seizure in a public place.

By 1995 at no point had the teratogenicity of sodium valproate been discussed.

In 1997 I met my son Andy’s father. I went to my neurologist and asked about Epilim’s suitability during pregnancy. He said there was a maximum 7% risk of problems and that I shouldn’t worry. He was reassuring, but I still insisted that I be changed to a different medication. I started taking lamotrigine – 25mg every other day for 2 weeks then every day. Once I had reached a therapeutic dose I was to reduce my Epilim.

I found out I was pregnant Easter 1998. I had not reduced the Epilim dose and had been taking no more than 25mg of lamotrigine per day. I stopped the lamotrigine and attended pregnancy checks.  I had about seven seizures during my pregnancy, whereas I had been having them once or twice a year before.

I was diagnosed with pre-eclampsia three weeks before my due date and I was induced. I opted for an epidural for pain relief as it would be safer for me and the baby if I had a seizure during delivery.

When he was born Andy was floppy and needed to be resuscitated. The neonatal team whisked him off into intensive care. I saw him a couple of hours later and I remember clearly the tubes, the blue light of intensive care, the monitors, the incubators and the calm.

I held him for the first time when he was three days old. He didn’t have the sucking reflex so I had to use a syringe to put my expressed milk down a tube in his nose to his stomach. The first noise I heard from him was the distress of having the tube down his nose replaced.  It was upsetting to see my baby in this strange environment being hurt by someone who was trying to save his life.

Global developmental delay was regularly mentioned as Andy got older. He had a consultant paediatrician, physiotherapy, support boots, speech and language therapy, an educational psychologist, a preschool teacher and a key worker at a family centre. For a couple of years we had three or four appointments a week. There was no way I could go out to work and I had become a single parent.

Autism was mentioned when Andy was 2 ½ but I wasn’t ready for a diagnosis at that stage.

The paediatrician referred Andy to a geneticist and he was diagnosed with foetal valproate syndrome aged 3.

I opted for a sterilisation shortly after Andy’s diagnosis and changed my medication a year after that. I became stable on 2000mg levetiracetam and 200mg of lamotrigine a day.

Andy was then diagnosed with autistic spectrum disorder and started mainstream primary school with a one-one support worker. He was wearing nappies until he was 7 and a changing facility needed to be provided. His progress was slow. He recognised letters, numbers and words because I had done extensive work with him at home,  but he didn’t initiate any conversations and wouldn’t respond to questions. It was difficult taking him to other people’s houses, as he didn’t interact and he chewed everything he could get hold of. I can’t describe how stressful it was and I stopped visiting people for fear he would destroy their belongings.

At the age of 11 Andy moved to a special education needs school, and within just three weeks he started speaking spontaneously.

Andy is 16 ½ now and he continues to progress, but his levels are those of a 6-year-old and he has preschool levels for communication. He has the disorder, pica, which is a major problem as he puts inedible objects into his mouth and swallows them. We’ve had a couple of trips to A&E due to this and fortunately he has been ok. He needs pretty much constant supervision and it is unlikely that he will ever live independently. Community provision for people with learning disability is being cut, and with little suitable housing provision available I fear for his future.

I love my son dearly, but if I had known about all the painful medical procedures he would have to go through, and the challenges he would have to face as an adult, I would have made sure I did not become pregnant whilst taking sodium valproate. I live with the daily guilt of having epilepsy, taking a medication while pregnant and believing my doctors. I know it’s ridiculous and that I shouldn’t feel that guilt, but I do.

If someone you know is making a decision as to whether or not to have a baby whilst taking valproate, please make sure that they are fully aware of the risks. The latest Government guidance states that unborn babies who are exposed to valproate have a very significant risk of developmental disorders (up to 30-40%) and/or congenital malformations (10%).

Image on this page are courtesy of Leicester Mercury