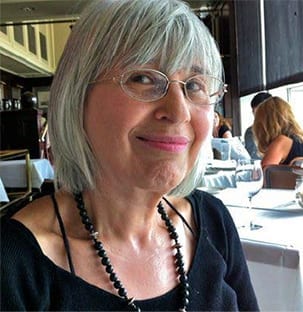 Carolyn has lived with epilepsy since her teenage years. She is a retired biochemist who specialised in immunochemistry and trace element analysis.

I can’t be sure when my seizures began but as a teenager I vividly recall lying in bed with my eyes closed and seeing the world speeding up, almost like a video being fast-forwarded. It was frightening and disorientating.

It was only when, many years later, my husband asked me if I had epilepsy that things began to fall into place. No, I told him, but my uncle did. I had no idea why he had asked me, but it turned out that he had witnessed a tonic clonic seizure.

The reality of my condition came soon after. I had begun to notice that my hearing was becoming distorted although hearing tests found no abnormalities. I jokingly said that if it wasn’t my ears causing the distortion then it must be my brain.

I didn’t learn just how right I was until a year later when I found myself waking up in bed with my clothes on. This puzzled me, and finding firemen entering the bedroom was shocking and disorientating. The painfully bitten tongue and the sore and bruised limbs spoke forcefully that something had happened, but what it was, I did not know.

Upon arrival at A&E I was drowsy and headachy with my first experience of postictal confusion. When asked what had happened and why I was there, I could not answer because I didn’t know. My husband filled in the detail: while in the kitchen I had dropped to the ground. He heard me fall and rushed in to see my limbs thrashing. After the seizure subsided, he picked me up and carried me to my bed. I was in shock that all this could have happened without my knowledge. I was thirty years old. Thus began my life with an epilepsy diagnosis, a life-long reliance on antiepileptic medication, and as someone for whom epilepsy was more than a life-changing condition; it became a cause.

Medication has been at the root of some of the epilepsy-associated problems that have impacted my life. Both Dilantin and Phenobarbital produced skin reactions which required urgent A&E visits and Phenobarbital caused severe breathing problems as well.

As a result I began my thirty-year Tegretol journey with dizziness and nausea that initially left me discouraged until it lifted after a month.
Happily, through all my years of seizures and side effects, I was always able to work, to pursue and advance my career, and even to move from California to England.

This remained the case for many years. I was only aware of the tonic clonic seizures when my husband told me I had had a nocturnal one, still a rare occurrence. However, what became noticeably worse were the sound distortions, which caused me real suffering and I now know were temporal lobe seizures.

Even typing this, remembering it is upsetting. After the sound, within what seemed to be a few milliseconds, came the terror. Not fear of anything in particular, but pure, unmitigated, all-consuming terror. Tonic clonic seizures were terrifying to onlookers but I knew nothing about them whereas the temporal lobe seizures were unbearable for me.

The revolution in my epilepsy care started with a change of neurologist. She immediately ordered a bone scan. Thirty years on Tegretol, known for its calcium-leaching side effects, had left me with osteoporosis, so I was prescribed Trileptal which targets temporal lobe seizure activity. One immediate effect was a marked decrease in my energy levels and I found myself taking frequent naps. Due to various other side effects and bizarre behaviours, Trileptal was reduced with the introduction of Vimpat into my twice daily regime.

It was at this point that it became clear that there were triggers for my temporal lobe seizures. Sometimes they occurred spontaneously when I was at home sitting quietly, but cacophonous, discordant sounds were such a strong trigger that simply being around more than one person talking at once made me uneasy to the point that I had to move away. This was socially isolating in ways the tonic-clonic seizures had not been. For these reasons I underwent surgery to implant a vagal nerve stimulator which my neurologist felt might achieve better seizure control.

At the same time my wonderful neurologist ordered a battery of tests (MRI, PET, and neuropsychology testing) to see if I qualified for a new neurosurgical procedure: laser ablation. A three-day video EEG in hospital was unremarkable until my anti-seizure medications were withdrawn at which point a temporal lobe seizure was triggered, pointing to the right amygdala as my epileptogenic focus. My neurosurgeon explained to me that it had a lower success rate than a total lobectomy, but that a lobectomy was still possible if my symptoms persisted following the surgery.

It is now six months since the intervention. I am still on the same doses of Trileptal and Vimpat, but this will be reviewed on the anniversary of my surgery. I have been testing my limits by doing things that I could not have done before without bringing on a seizure. Once impossible things like going out for a coffee, entering a museum, or even walking to parks past traffic noise has given me a sense of freedom. Freedom to explore, freedom to discover, freedom to belong, and freedom from the chains of epilepsy that have been so limiting for so long.

Epilepsy research has been transformational in my life and in the lives of many of us who have benefited from it, but there is much left to be done in terms of the diagnosis and treatment for those for whom current treatments are ineffective. Epilepsy Research UK is a leader in translating fundamental research into therapies that transform lives like mine.