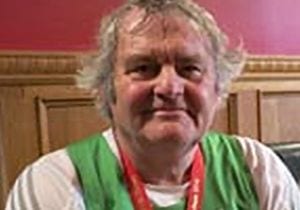 Andrew is 67 and lives in Kent. In April 1971, just 8 months after getting married, he developed an angioma or aneurysm in the middle of the night, without warning. This rendered him comatose and he was taken to West Hill hospital in Dartford where they tried to diagnose the problem.

From there he was sent to the Brook Hospital where they specialised in brain surgery. Andrew has limited recollection of the time but recalls seeing men with red C-shaped scars across their shaven heads.

Andrew says, “I was given my life back by an elderly surgeon called Mr Gibbs who also had a clinic in Harley Street. He needed to locate and remove the blood clot that had formed and generally patch me up. He did a remarkably good job on me, for which I will be and have always been, eternally grateful.

“Towards the end of my month-long stay, the Ward Sister asked me if I knew what happened to me. I said that I didn’t really, and she spelt it out. 50% of Angiomas did not make it to the hospital alive and 50% of the others did not survive the operation. Of the remaining 25%, half of them were left with debilitating conditions that prevented them from working as they had done before.  It was clear to me how very fortunate I had been.”

The interior scar tissue on Andrew’s brain caused him to develop seizures, and between 1971 and 1975 he had six of these. He was put on Phenobarbitone and Mysoline to control them. Currently, he takes Epilim.

Andrew continues, “During the decades that followed Pam and I had a family of three beautiful girls who have all gone onto have families of their own. I enjoyed a full career as a secondary school teacher until I retired in 2007. This included obtaining a BEd (Hons) degree, broadening my teaching to include outdoor education and Religious Education (I was head of the dept for 4 years), and being a unit leader for 17 years for the Duke of Edinburgh Award scheme.

“There are so many other life experiences that I have enjoyed, such as foreign travel and community projects in rural Kenya.  I have been so fortunate that epilepsy has not prevented me from doing any of these things.

“While I cannot predict what will happen in the future I have grown to be realistically optimistic; being grateful for every new day as it comes.”

Andrew took part in the London Marathon 2014 in support of ERUK.