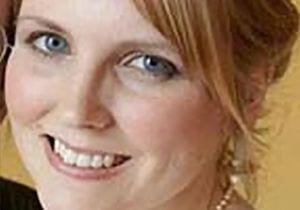 I hope that research will one day lead to a more personalised approach to treatment as epilepsy is different for everyone.

Amy has had epilepsy since the age of 14, and her seizures are controlled on sodium valproate. With careful management she has managed her condition through both her pregnancies.

Amy who is married is now in her early 30s. She finished her PhD studies in medical statistics at the University of Sheffield in 2014 and is now back at the University working as a statistics consultant helping to design and analyse medical data. Some of her work involves working alongside colleagues studying epilepsy and other neurological conditions and the drugs used to treat them. Outside of work most of Amy’s time is taken up being a mum to her son Jack, who is now almost 2, but when she gets the chance she enjoys spending time with friends, listening to music, taking long walks and being creative with sewing or knitting needles.

At the age of 14, Amy collapsed in the shower one morning soon after returning from a family summer holiday. She was taken to hospital and kept in overnight, but tests were inconclusive and she was discharged. Two weeks later the same thing happened, and Amy was taken to hospital again. This time she was diagnosed with epilepsy, and she was informed that the episodes she had experienced were tonic clonic seizures. The root of Amy’s epilepsy is presumed to be genetic, because her maternal great grandmother had epilepsy, and her mother also suffered two seizures as a teenager.

There were no neurologists at her local hospital at the time, so Amy was put under the care of a paediatrician. She didn’t start treatment straight away, because her parents were concerned about unwanted side-effects. Her tonic clonic seizures were relatively infrequent at first (sometimes months apart), and they didn’t feel that the benefits of medication would outweigh the risks. In addition Amy quickly noticed that her seizures were linked to tiredness, and that they occurred either first thing in the morning or late at night, so her school life wasn’t affected.

It soon became evident, however, that in addition to tonic clonic seizures Amy was also experiencing absence seizures and occasional myoclonic jerks, which were a lot less noticeable. She would be talking to someone and she would suddenly lose consciousness (although it would appear like she was daydreaming). Even though she was unconscious for only a matter of seconds she would completely lose the thread of the conversation. It made her feel embarrassed. The absences and myoclonic jerks were also linked to tiredness, and they often became more frequent in the build-up to a tonic clonic seizure. Amy used this as a warning to get into a safe place.

Having epilepsy became harder for Amy with time, because she wanted to do everything that her friends and typical teenagers do. As she tried to keep up with them her seizures started to become more frequent. Amy believes that this was due to the fact that she wasn’t taking enough care of her health and well being. She also noticed that her memory was getting worse as a result of her recurrent seizures.

At the age of 16 Amy and her parents decided it was time to control the seizures with medication, and the paediatrician prescribed Keppra. This had no effect on the seizures but caused Amy to put on weight. Her mother believes that it also affected her memory. Despite its lack of effect, Amy was advised to continue taking Keppra which she continued to do for approximately two years. However she was struggling to focus on her studies, and her A-levels suffered as a result. In spite of all this, Amy managed to get a place at Sheffield University.

A year or so before going to university (aged 19), Amy was referred to a consultant neurologist and epilepsy specialist nurse. The consultant took her off the Keppra (saying that it wasn’t the most appropriate medication for her type of epilepsy), and prescribed lamotrigine. This had no effect either, and Amy and her parents began to fear that nothing was going to control her seizures. During her first year at university Amy was still experiencing seizures and she seriously wondered whether she should continue with her studies. However, at the age of 20 she was prescribed Epilim Chrono (sodium valproate), to which she responded well, and her seizures were controlled. Amy stayed at the University of Sheffield, where her studies improved dramatically; and she went on to do an MSc (in Leicester) followed by a PhD (back in Sheffield).

Amy met her now husband soon after what she thought would be her final seizure. His sister also has epilepsy, and so although he didn’t experience Amy having a seizure for several years, he knew what to do when the time did come.

After a few years of marriage Amy and her husband Martin decided to start planning for a family. Fortunately at the time that she started taking sodium valproate Amy had been warned of its potential effects on an unborn child so she proactively sought the advice of her epilepsy nurse and GP when she first decided to try for a baby.

Under her GP’s supervision, she very gradually reduced her dose of sodium valproate, to a point where Amy felt comfortable. This was about half of her usual dosage. All was fine for about several months and then Amy had two tonic clonic seizures within a few days. It was also around this time that the newer published guidelines for women on sodium valproate were released and so the couple stepped back from trying for a baby until they felt they were taking the least risky path possible. Amy suffered two further seizures during her pregnancy, after which her medication was increased a little. Amy and her husband decided she should stay on this dose throughout the rest of her pregnancy and Amy managed fairly well. However, because of the strain that the pregnancy was putting on her epilepsy Amy was induced a week early and gave birth to her little boy Jack. Just a couple of days later Amy had another seizure and her dose was gradually increased again to its maximum level.

Amy has been using a seizure detection device for a little over a year now and although she has only experienced one seizure whilst wearing it, it did detect the seizure. When the device detects a seizure it sends a message via Amy’s phone to her husband to alert him to the situation. Being a new mum, and spending one day a week alone with Jack this gives Amy reassurance that if something happens, Martin will be called. Amusingly Amy says that sometimes is gives a false alarm either when she is pushing her son’s pushchair or in a car or bus going over bumpy ground!

At the moment Amy is again reducing her dose of sodium valproate in preparation for planning for a younger brother or sister for little Jack. Because of this she is at increased risk of experiencing seizures again so is seeing her neurologist and epilepsy nurse a little more regularly than her normal annual visits.

Because of her medical statistics training Amy is well informed about medicinal risks, such as those of sodium valproate and the discussions that surround its use, especially in pregnancy. But for her it is the only medication that works and keeps her seizures at bay. Amy knows that she needs to seek medical help and advice when planning for a family so that any decisions that she and her husband take are well informed; and although she has been offered alternatives to continuing with sodium valproate, they have decided to continue with it during this second pregnancy, though at a managed, lower dose.

There have been some very difficult times over the last few years, but Amy is very happy with her life. She feels extremely lucky that under normal circumstances her seizures are under control, and sympathises greatly with people who don’t respond to any treatments. She knows that epilepsy is different for everybody and of course she wishes that she didn’t have to take sodium valproate, but she also recognises that it is the only medication which gives her the quality of life that she has today.

Amy hopes that research will one day lead to a more personalised approach to treatment, because there are so many different types of epilepsy and everyone who is affected is affected differently.