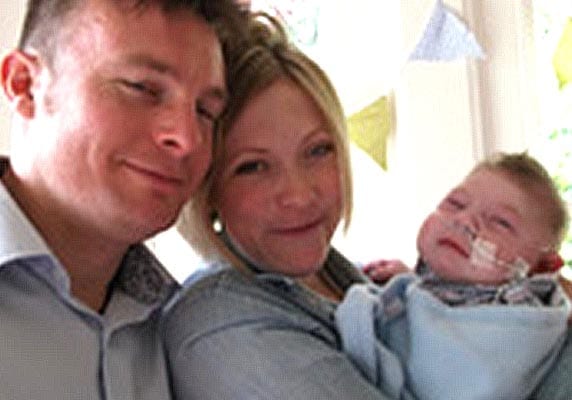 The first time we knew our son
Arthur was poorly, was in a
moment of silence just
after he was delivered

Alice and James’ son, Arthur, was born with an underdevloped brain, and epilepsy that couldn’t be controlled. Here Alice talks about Arthur’s bravery in life, and their drive to fundraise for research in his memory.

Alice and James’ son, Arthur, was born with an underdeveloped brain, and epilepsy that couldn’t be controlled. Here Alice talks about Arthur’s bravery in life, and their drive to fundraise for research in his memory.

“Last July, along with three of our amazing friends, James undertook our ‘Great Glen Triathlon’. The Great Glen is a sequence of lochs and rivers that cuts diagonally across Scotland from Inverness and through the Highlands to Fort William. The guys’ challenge was to cycle the length of the Great Glen on hill trails from Inverness to Fort William, climb Ben Nevis, and finally kayak back through the Great Glen lochs return to Inverness – all in less than a week. It’s a 150 mile round trip and they tackled it the hardest way we could think of.

The first time we knew our son Arthur was poorly, was in a moment of silence just after he was delivered. Newborns normally announce their arrival into the world with a cry. Arthur’s cry was replaced by the noise of stressed midwives and hospital alarms.

Within an hour Arthur was diagnosed as showing signs of abnormal brain activity – seizures.

James and I were told from the outset that our time with Arthur may be short. Initially hours. Then days or weeks. Months, years. Then months again.  We were told that our son had been born with an underdeveloped brain. That our lives together would be full of challenges. That Arthur would spend a lot of time in hospital. That he would need round the clock care. May never see. Would never develop.

But no one told us about the bravery, determination and unwavering love that we would witness in our son on a daily basis. No one told us how adoring his cuddles would be. Or that he would have a sense of humor.

At points Arthur suffered 60 or 70 seizures in a single day. The doctors fought to bring his epilepsy under control, but as one consultant told us the treatment of epilepsy was ‘more of an art form than a science’. We were on the edge of medical understanding. No simple combination of drugs or diet would work for Arthur.

Ask any parent and they will tell you that you never get used to watching your child have a seizure. For nearly seven months James and I comforted Arthur while seizure after seizure overtook his body.

For me, there is a part of life that stopped when we buried Arthur. A washing basket of baby grows still haven’t been washed. But the world has kept on turning.

More babies have been born with underdeveloped brains. More parents have sat and watched their child fit. And more doctors have tried to make it stop.

So two years on from the week that Arthur died James and I returned to the edge of medical understanding. But now to show our support for those trying to figure out the ‘whys?’, ‘hows?’, and ‘what ifs?’ of epilepsy. We raise money for Epilepsy Research UK so that maybe one day another baby like Arthur won’t have to go through what he did. And if our fundraising is enough to stop one other parent from having to watch as their child seizes – that will be enough for us.”

James and team successfully completed their Great Glen Triathlon raising £6,643.53 in sponsorship from their amazing efforts! Our thanks go to James, Ben, Lee and Moswen, and their support team of Alice and Nim, for such inspirational support of our research. www.justgiving.com/JamesGreatGlenTri

At a reception held on May 20th at the Royal Society to launch National Epilepsy Week, we announced grant funding of over £1 million across ten research projects all over the UK.

What an amazing day Team ERUK had at the 2019 London Marathon. 14 amazing runners taking on this iconic challenge for Epilepsy Research UK and a fantastic cheering squad

Do something amazing today and make a donation. Your money will go to support the pioneering research projects which help and support people with epilepsy