“This (ERUK) grant has given us the opportunity to directly help families. Many of the parents who participated in this study desperately wanted to know why their child had severe epilepsy. It has been great to give answers to so many families. This has made real differences in the management of some of the children. At the same time, we’ve learnt a lot about the potential of exome sequencing (as a tool for research and diagnosis) and gained new insights into brain function.” Professor Angus Clarke, Cardiff University.In 2012, Professor Clarke’s team, including Dr Andrew Fry and Dr Hayley Archer, were awarded a £149,507 pilot grant to identify ‘de novo mutations’ (DNMs) that cause severe, early-onset epilepsy. DNMs are gene changes that arise in a developing baby and are not inherited from either of its parents.The team has made discoveries that have already impacted epilepsy diagnosis, epilepsy treatment and family planning.During the study, the scientists used a technique called exome sequencing, which reads the protein-making sections of DNA (where disease-causing mutations are often found), on samples from 54 children with severe, early-onset epilepsy and both their healthy parents. They looked for DNMs in the children and assessed whether they were likely to be the cause of the epilepsy.The analysis identified 84 DNMs in the children. Nineteen children had DNMs that were clearly disease-causing (pathogenic), and many of these were in genes that are known to cause early-onset epilepsy. Several other DNMs were in less well-recognised epilepsy genes.Excitingly, a handful of likely pathogenic DNMs were found in genes that have not previously been linked to epilepsy. The scientists are building on these findings to uncover more about their potential role in epilepsy development.Examples of the most ‘important’ pathogenic DNMs, and a very brief description of their functions, are given in the table below.The researchers have fed the findings back to the families of children with pathogenic DNMs, and there has already been an impact on their care. For example, a child with a DNM in SLC2A1 has been prescribed the ketogenic diet; those with DNMs in SCN1A have had a change of medication; and the child with a DNM in GRIN2A is trialling a relatively new type of antiepileptic drug that directly targets excitation in neurons. In addition, understanding the genetic basis of these children’s brain disorders will allow their doctors to advise the parents about the risk of having another child with severe, early-onset epilepsy.Having witnessed the power of exome sequencing in finding pathogenic DNMs, Professor Clarke and his colleagues are working to establish exome sequencing as an NHS diagnostic test in Wales. If applied across the UK, this approach could increase the accuracy of epilepsy diagnosis; decrease the time to optimal treatment; avoid unnecessary investigations; inform family planning; and even allow for genetic diagnosis in the womb.We would like to congratulate Professor Clarke and his team on this excellent work, which stands to directly benefit people with epilepsy. 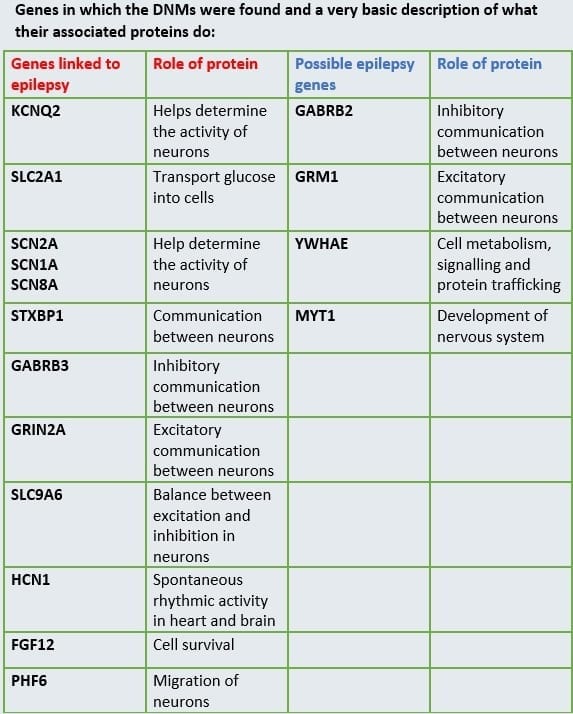