Tracey says, “Epilepsy has impacted our lives significantly in the last few years both with our beautiful daughter Caitlin and our godson Will. It’s not something that runs in our family and unfortunately both children were both diagnosed with rare and severe syndromes – Caitlin with West Syndrome (1 in 10,000 children affected) and Will with Dravets syndrome (1 in 20,000 children affected). Fortunately, Caitlin is making staggering progress, has been seizure free for nearly 6 years and lights up our lives like you could never imagine!!  Our Godson Will is also confounding the odds and his development progresses each time we see him.

Michael and I always said we would at some point raise money for an epilepsy charity in recognition of the support and care that Caitlin has received – so here we are! And, yes we could have gone for a 5k, a 10k, even a half marathon… but no, The Mighty Deerstalker it is – a ‘notorious’ night run in Peebles. Its on 16 March and is a 10k obstacle race running through woodlands, through waist deep water obstacles etc. So its gonna be cold and its gonna be wet. Great. Here is a quote and a link to the website. Youtube also has some interesting footage of last years run.

‘the course will feature all the thrills, spills and hills you’ve come to expect, with regular wettings and obstacles like “The Rack”, “The Scree” and “The Tunnel” to push you to the edge.’

No I cant believe we are doing it either. And on a Saturday night………..

Well I have to say that goes down as one of the worst experiences of my life. Seriously – it was bonkers!

Clambering over towers of haystacks and through huge trainer-stealing muddy bogs was fun – running up the mountain was even ok but when the extreme felling on a sheer decline through the pitch black forest started, I have no problem admitting I was absolutely terrified. Then followed cargo nets, 3 runs through the river ranging in depth from ankle to thigh deep (we’re now at 8 o clock on Saturday night and it had SNOWED that day), the quagmire that was the path by the river was impossible to do anything but skid through then we hit the storm tunnel – this was waist deep and, because of the caked mud we were covered in, was actually quite refreshing!?

The ‘run’ (it soooo wasn’t a run!) then came to a finish by crawling through a cargo net then an 8 foot wall with a rope you had to pull yourself up on and jump off the other side. Horrendous. Totally horrendous.

Add to all this, Michael popped his knee coming down the first mountain (he’s going in for an op in about 3 weeks) so, on marshals instructions, we had to pull out of the second peak and the scree (thank god!!). Turns out we ran the 5k course which is actually 10k – the 10k is actually 17k.

In all honesty I think we’re at the stage where we are looking back on it as an experience but I would recommend no-one ever ever agrees to sign up for this!! Its not fun!

Thanks once again for all your support. If you haven’t and still want to, heres the link. 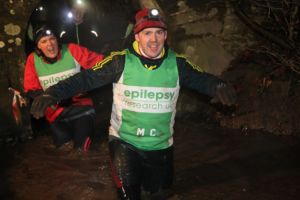