Louise and Giorgio Brida’s beloved nephew August Hammarbäck died following a seizure in the summer of 2010. Here Louise tells us of their motivation to take up running to support our research:

“Last March my nephew August would have turned 17 if he were alive. If… “August loved fishing and a beautiful morning at our summer house he got up at dawn, took his rod and went to the lake a few yards from the house. Whilst fishing he had an epilepsy seizure and fell forwards with his head in the water – feet still on dry land. Since nobody else was awake he had no chance of getting out. He was only 15.

“We still struggle to find any meaning with August’s death but in order to give it some sort of meaning my husband Giorgio and I decided to raise money for ERUK. So, although no runners, we signed up for a marathon. August was such a warm and loving person who surely would have been happy to help – and he is probably smiling from where he is now, seeing that he has.

“Throughout our training we wrote Running for August blogs and had a Facebook page so that people could follow our progress (well, sometimes regress…!), and several months, toenails and generous donations later we finally crossed the finish line. I am sure August was with us every step on the way. Not only because we would never have been able to finish otherwise, but because the amazing generosity both known and unknown friends showed throughout. August touched their heart.This fundraising has made me feel that there is hope. One day there will be a cure for epilepsy.Just don’t give up. Keep fundraising. And keep August’s spirit alive.”

After many months of training, Louise and Giorgio Brida ran the Stockholm Jubilee Marathon in July, and Giorgio has just completed the challenge of running 100 miles in race events during 2012. Our thanks go to Louise and Giorgio for their extraordinary commitment to supporting our work. Together they have raised over £14,000 towards research in memory of August. 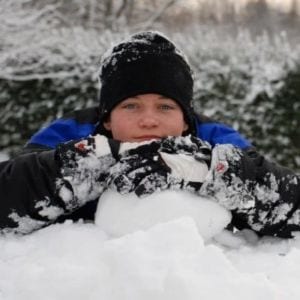