Philippa Miller tells us about how the loss of her best friend Lara inspired her to fundraise for Epilepsy Research UK.

“I lost my best friend Lara Weston to epilepsy in June 2014 just after her 22nd birthday. She had epilepsy from an early age and for the last 13 years of her life she had suffered from uncontrollable seizures.  I felt a small part of her frustration as her condition did impact her life in negative ways. She had been given the option of surgery to try and control the seizures but it was likely that she would lose 50 percent of her vision and the guarantee of seizure freedom was not very high. She had celebrated her 22nd birthday a week before she passed away, which I can gladly say we did in style! She died on my graduation and her family were kind enough to let me say goodbye to her in the hospital.

I knew that early death was always a risk with Lara but I never thought she would be a statistic. As a way of dealing with my grief I wanted to help raise money for epilepsy research. There is so much that is not known about epilepsy and there is not that much funding available for areas of research that need to be investigated.

The idea of bungee jumping was to do a crazy thing that would make people want to donate. I decided to jump dressed as a minion as they were the characters that Lara loved and I could imagine her cringing at the thought of me painted bright yellow and looking ridiculous in public!

Collecting money from the supermarkets was a lovely experience 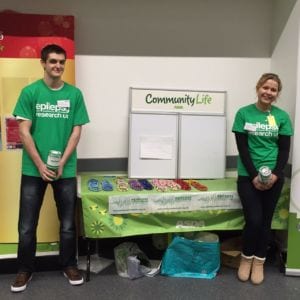 as many people had their own story to tell and so many gave generously. It was sad that so many people commented on how they never saw fundraising for epilepsy research and it has increased my drive in raising more money.

Fundraising for research has helped me through my grief and giving me a positive focus. I know research is a long way off from curing epilepsy but I want research to be able to give people like Lara more options to treat and deal with their condition.”

We are so grateful to Philippa and to all her and Lara’s families and friends for helping Philippa raise over £1, 318 from her bungee jump and supermarket collections at Asda, Eastleigh and Sainsbury’s, Winchester.