Dilraj Sokhi recently trekked Mt Longonot in Kenya to raise money for both Epilepsy Research UK and a research project in Africa raising over £1800.  He talks about it, and his project here:

‘Epilepsy is much more common in Africa because of brain infections such caused by the tapeworm which infects pigs and humans, and the eggs can hatch and travel to the brain causing a condition called neurocysticercosis. Pigs are easier to raise by poor farmers in impoverished areas such as Western Kenya; suboptimal farming practices and lack of sanitation increases the risk of pork being infected by the tapeworm. In Latin America and South Asia neurocysticercosis causes up to one third of epilepsy despite being a treatable and potentially eradicable disease. The association is less clear in sub-Saharan Africa and could be a significant public health problem.

I am interested in epilepsy due to brain infections, and have taken time out of my training as a neurologist in the UK to investigate epilepsy due to neurocysticercosis in the impoverished region of Western Kenya near Lake Victoria. This will be the first ever study in a tapeworm-endemic region of Kenya. Aside from the direct benefits to those treated for neurocysticercosis, I will also be involved in capacity development of the medical staff in the local hospitals regarding epilepsy management. This project is self-funded. Therefore, my wife Jyoti and I organised a fundraising hike up Mount Longonot in the Rift Valley in Kenya.

This mountain’s name is derived from the Maasai word “oloonong’ot”, meaning “mountain of many steep ridges”. The trek to the crater edge is about 3km, but the walk around the crater edge is 7km! The mountain last erupted over a century and a half ago, and the large caldera is now covered with forest and is home to a lot of wildlife. There were over 30 climbers, the youngest being my neice at age 5, and the oldest my father (70! Well done dad!). We were most fortunate to be able to undertake this in partnership with Epilepsy Research UK thanks to the help from Jo Finnerty and my friend from medical school Delphine van der Pauw. Thanks Delly! Altogether we raised £1800 which will go along way towards helping improve the lives of people living with epilepsy in this region of the world. Thank you all, and God Bless! 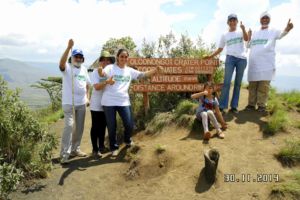 Thank you so much Dilraj for such fantastic support!