Martin Bedford on the Clipper Round the World Yacht Race

Last year, Martin Bedford embarked on 2 legs of the Clipper Round the World Yacht Race, raising money for Epilepsy Research UK. He tells his story here:

“Many people compare the feat of circumnavigation with the challenge of climbing Mt Everest. Although both represent a pinnacle in their respective disciplines, the fact remains that many more men and women climb Everest every year than circumnavigate the planet.

60 years ago the idea was born to see who could achieve the greatest sailing voyage ever conceived – a solo non-stop circumnavigation of the globe. Nine sailors set out to claim the Golden Globe trophy, of these, only one returned after a successful solo circumnavigation – Sir Robin Knox-Johnson in his ever faithful Suhaili. So began a series of challenges as over the years men and women have sought to prove themselves against the forces of nature and against the master of the seas, Neptune.

The challenge was opened up for the first time to non-professional crew when the Clipper Round the World Yacht Race was conceived by Sir Robin and together with William Ward founded Clipper Ventures, a company that would run the race. The first race set off on 16 October 1996. The organisers own a fleet of 12 identical yachts, and provide qualified skippers to lead each team of 24 strangers. Crew can either sign up for the whole race, or one or more legs. The race route follows the prevailing currents and winds, hence the name ‘Clipper’.

Clipper Round the World is the longest global yacht race, 40,000 miles stopping at 15 ports on six continents. It consists of 8 legs.

My Clipper adventure started over 3 years ago in November 2010. As the train pulled into Clapham Junction station, peering out of the grubby train window, I noticed a poster entitled “Raced by People Like You – 40,000 miles – 1 Global Race” on a picture of a stripped down 70’ racing yacht crashing its way through the Southern Ocean. It immediately grabbed my attention and I was hooked!

After initial interviews, down-selection as a potential candidate, numerous classroom, swimming pool (abandon ship) and ocean passage pre-racing training sessions, skipper allocation, crew allocation, and finally yacht allocation stages later, I was ready for the challenge as ‘a legger’ as I didn’t have 11 months annual leave !

Initially I signed up for Leg 1 as it only required a one-way flight home (yes I’m a Yorkshireman) but then realized I could manage the leave impact by signing up for a second Leg in 2014. Two different years, two lots of annual leave! So I chose Leg 8 too – the glory legs – leave & return (again only one flight needed).

I had two goals on this adventure, 1) to do something extraordinary 2) to use the event to raise awareness for a charity close to my heart – Epilepsy Research UK – my youngest son developed epilepsy 6 years ago.

The starter’s gun fired on 1st September 2013, leaving the UK from St Katherine’s Dock Tower Bridge London. The leg 1 passage to Rio was a mix of force 9s, wind holes, very hot temperatures, squalls, exhaustion and fun. The leg 8 passage from New York to London set off early June, arriving back in London on 12th July. It was quite different to leg 1, colder, faster, seasoned crew, sleep, much better food !

I’d like to thank the Epilepsy Research UK team for their support during my adventure and I hope the funds I raised through my JustGiving site help further their research.”

We’d like to thank Martin for his fantastic support and are delighted to have received £1,122.89 from his fundraising. 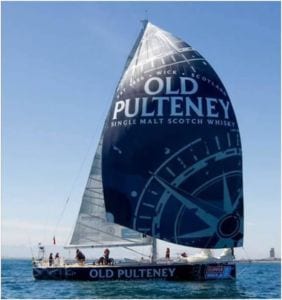