Richard Buckingham took on the Marathon Alpes-Maritime Nice – Cannes earlier in November, and recounts the adventure for us here:

“A friend of mine had run the Marathon Alpes-Maritime two years ago and partly because I hit my forties recently and partly because we love the South of France, but mainly because it presented a great opportunity to raise money for a cause close to my heart, I decided to join him on the route from Nice to Cannes on November 13th this year.

My older brother Nick is awesome in many ways (despite the burden of having me as a younger brother) and one of the things that makes Nick unique is his epilepsy and it has been a factor in his (and my) life from day one.

What I didn’t realise (until I started raising money) was the large number of people in everyday life who are affected by epilepsy and are getting diagnosed at various stages, and often quite late, in their lives.

Supporting the only charity in the UK that is dedicated specifically to funding research into epilepsy made the most sense and I was really pleased to partner with Epilepsy Research UK.

The whole weekend was fantastic. My friend and I flew out on a Friday early evening, accompanied by one of my three children, Max, a cheeky 7 year old. Met by my father at Nice airport we set up base at our family home in Vence, about 20 minutes drive north-west of Nice.

We travelled into Nice on the Saturday, with the sun shining and hardly a cloud in the sky. We picked up our numbers and goody bag from the Running Expo and sat outside for a long lunch featuring a large amount of pasta! Saturday evening was spent eating more pasta, resting and watching a bit of Strictly!

Awake from around 4.30am on Sunday with nervous energy aplenty, we drove into Nice and the Allianz Arena, arriving at around 6.30am to get ourselves ready for the start. It is worth noting that following the horrendous event in Nice on July 14th and ongoing security concerns, the start line was moved from the Promenade des Anglais to outside the Allianz Arena just north-west of the city.

We lined up as the sun was rising and the mood was positive and excited as we crossed the line soon after 8am. The run was amazing. Probably more undulating than I was expecting/hoping for, it spent much of the course hugging the stunning coastline and going through beautiful coast side towns.  Having run the New York marathon in 4.09 six years ago, I  quietly harboured the aim of running this marathon in under four hours.  Managing my lap time carefully and dragging around a sore knee I managed to creep in at 3.58, the finish on the front in Cannes made all the more special, by Max breaking out of the crowd and running alongside me.

That evening we celebrated with steak and bottles of red in a restaurant in Vence and slept very soundly that night!

We have been blown away by the support for Epilepsy Research UK and have raised close to £5,000 over a few weeks.”

Huge thanks go to Richard and all his generous supporters from all at ERUK – this is a fantastic contribution to our research. 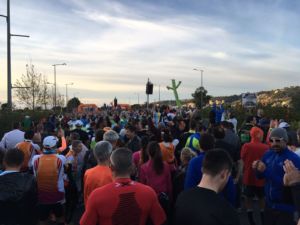