Lorraine Hughes-Gage dedicated 2014, her 60th year, to raise money for research in memory of her daughter, Lucy Jane Brooks. Here she recalls some of the highlights of her year.

“Lucy was a charismatic person whose lust for life charmed all those who met her and made her many, many friends. Lucy was always positive and never let her epilepsy get in the way of her ambitions and living life to the full. I decided that for my 60th year, I would hold and take part in six events, one for each decade, to raise money for research in Lucy’s memory.

My first event was on Purple Day in March. Looking particularly lovely, my friend

and I dressed in purple clothes topped off with long purple wigs and stood in a branch of Waitrose shaking our collecting tins. It was amazing how many people of all ages came up to us and chatted about themselves or someone they knew who suffered from epilepsy. We followed this with a bric-a-brac tea and coffee morning in May for National Epilepsy Week. 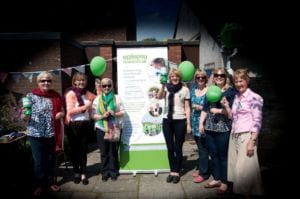 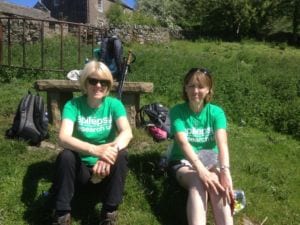 In June we had two great outdoor challenges with family and friends. On the Pennine Way we battled with wind and rain, climbed over fallen jagged rocks that had blocked our path and alongside a sheer waterfall. I do not think any of us realised what we had taken on! Next, the London to Brighton Bike ride. It was great fun even when we reached the gruelling Ditchling Beacon! The final and biggest event of our year was a Charity Ball, held on 20th September. It was not only a fantastic evening but it was also a great success financially. 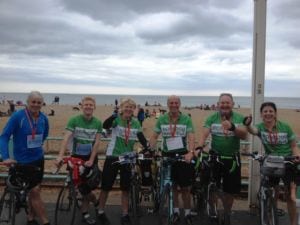 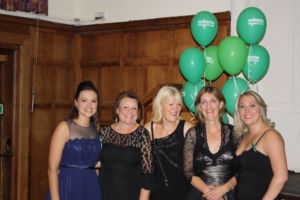 2014 was an eventful year and one I will not forget. I have had some humbling and memorable moments. At times it has been a hard slog, but thanks to the support of a few companies and the generosity and enthusiasm of my family and friends, I am thrilled we raised over £11,000. All the support and encouragement has given me the drive to carry on fundraising. Epilepsy Research has given me back a purpose in my life, and I am now busy planning some new event for next year!”

Our thanks go to Lorraine, her family and friends for such inspirational support.