Jefferson Sheard Charity of the Year

We are delighted that Jefferson Sheard Architects are supporting Epilepsy Research UK this year in memory of Sheffield-born architect Bryan Jefferson, who had epilepsy.

Music in the Round

Jefferson Sheard Architects and the Royal Institute of British Architects (RIBA) have joined together to present Man of Concrete a special concert of classical chamber music on Monday 19 October, 7.15pm at the Crucible Studio, Sheffield. The concert celebrates the life and musical loves of Bryan Jefferson CB CBE PPRIBA, who rose to the rank of President of the RIBA and Director General of Design Services at the government’s Property Services Agency.

The concert will be performed by Music in the Round’s resident classical chamber group Ensemble 360.

“We’re delighted to pay homage to Bryan, an architect renowned for his modernist approach. The programme we put together for the concerts is one of contrasts, including Berg’s Adagio for violin, which is deeply expressive as well as reflecting his love of mathematical structure and formal rigour within classical music. It seemed like a great way of linking Bryan’s love of chamber music and his characteristic style of architecture.”

Ticket prices start at £5 for under 35s and those attending a Music in the Round concert for the first time. They can be purchased from Sheffield Theatres box office online at www.sheffieldtheatres.co.uk or by calling 0114 249 6000. 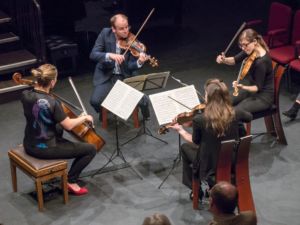