On the 15th may this year William decided to organise a football charity event against Birmingham City Football Stars at Sutton Coldfield FC.

William has from temple lobe epilepsy and has done since he was 18 months old, he is now 37.

William says:, “In just 10 week I managed to develop a group of tennis players from my local tennis club, who don’t or who have never played football in their lives into a team of beginner football players!

It was a challenge! I organised, local press, radio interviews, football kits, food/catering, pro refs, parking supervisors, tickets, leaflets, sponsors, music, hosts, charity prizes and the list goes on. This was all in aid of two charities close to my heart one of which is Epilepsy Research UK.

Around 200 fans turned up on the day to help raise over £1,800 of which I’m donating £1,200 to Epilepsy Research UK. It really was a great day and entertaining for many families.

All of our team members either have family members with one of the illnesses or has one of the illnesses themselves. Even though the end result was a 6-0 loss we’re determined to raise even more for us next year and I’ve already organised a rematch for September 13th 2017.

You can buy or reserve tickets already and I’ll make sure the team put on a better performance for next year! If anyone has lost a family member or whose family member has epilepsy and wishes to play next year please contact me via email at thorleys@hotmail.co.uk. Obviously players must be of a good standard!!”

Our thanks go to William for organising this fantastic event and raising money for our research. 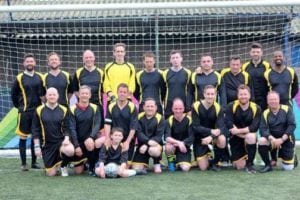