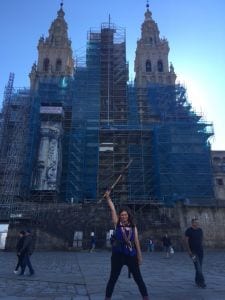 I had my first tonic-clonic about 7 years ago, when I was 21. It was my last year of university. As a young woman with no history, the doctors put it down to a one-off. A year later, it was a two-off. It was nearly four years after that first time that I was finally diagnosed. It was the best thing that could happen and now that my medication controls my seizures, I can live an independent life.

So, 7 years after my first seizure and more than 2 years since my last seizure, I decided to go on a solo hike along the Camino de Santiago in Spain – a walk of 800km, or 500 miles. I’ve always loved hiking and traveling, love the Spanish culture and thought it would be a good way to see the country and learn some of the language. My epilepsy meant that I had to take a few precautions. I had to ensure I had the right travel insurance and enough medication to last the full length of my trip. And I had a little tag on my bag saying “I have epilepsy” and the Spanish, tengo epilepsia. (I was told this made me look like Paddington Bear!)

I decided to raise some money for Epilepsy Research UK at the same time. Without research, and the right medication, I would never be able to do a trip like this. And as I was walking along, I spoke about epilepsy with so many people from different countries, most of whom knew little about it. Everyone had questions, the most common one being “but what do I do if you have a seizure?!”.

A lot of people asked me if I was scared and told me that I was brave to walk alone. The further I walked and the more I talked, the stronger I became and the more people began to see what a person with epilepsy can do. There are 52% of us in the UK who are living seizure free. And yes, it sometimes worries me that my seizures could return at any time. But that is the case whether I am at home or abroad – so why not walk across Spain in the meantime?

Francesca raised over £600 including Gift Aid for Epilepsy Research UK and we are hugely grateful for all her time and commitment to our work.

‘Seize Your Adventure’ is Francesca’s podcast where she discusses living life with epilepsy to the full and the hidden aspects of taking on adventures while living with the condition. You can listen to the ‘Camino de Santiago’ episode here.