Lizzy Davies recently completed The Big Chill Swim along with husband Will and friend Sarah to raise money for Epilepsy Research UK. She says,

“The Big Chill Swim is an annual event in Windermere, which sees a variety of people from all over the world jumping into icy water in only their swimwear. There are a number of races, ranging from 30m head up breast stroke to a full kilometre for the most hardcore! We competed in the team relay, swimming 120m between us to raise money for ERUK, in just our skimpy bikinis and shorts.

Two and a half years ago, our son began having seizures, which at the time appeared to be simple febrile seizures. However, the frequency increased over time, and in May 2013 he had 12 seizures over a two week period. He was referred to the most amazing consultant, Dr El-Moasseb at Grimsby hospital, who started him on Epilim to control his seizures. We have been very fortunate to avoid any nasty side effects, and apart from the odd blip when he is ill, Eddie is now seizure free and having a relatively normal childhood. We are very aware that not every child is as lucky as Eddie has been, and hope that with research, more can be learnt about the complex range of conditions under the heading of epilepsy to enable other families to see the light at the end of the tunnel.

We drove through the snow and ice early on Saturday morning, to arrive to the breathtakingly beautiful Lake District with crisp white snow topping the mountains. We were full of anticipation, watching the lake, when a huge gust of wind whipped the water 3m high, sending spray towards us. We quickly rushed to the warmth of the hotel hosting the event, suddenly full of dread, not just anticipation! Time dragged until 3pm, when we were called to register and get changed into our swimming suits. Every five minutes or so, we heard the announcer say “Please remove your clothes… Now get in the water”. After a last huddle in the warm starters tent, it was our turn to head out onto the pontoons. Will went first, doing two lengths (we couldn’t find another nutter to join us), followed by Sarah (who regretted agreeing on a spa day) and with Lizzy finishing up (wondering what she was doing with her life). We were lucky enough to have the best supporters going, all in penguin suits, running round making everyone smile, raising awareness of this great cause. Eddie brought his Nanny Batman and his best friend Reuben (Sarah’s son) along for the quack. The announcer told everyone we were raising money for Epilepsy Research UK, and to see the little penguins for more information, which they provided, along with lots of cute photos.

In the words of Eddie, “We’re the sensible ones, Nanny”. I think we can all agree with that, but it was worth 2 minutes and 11 seconds for this amazing charity. Our main aim was to survive, raise awareness and money. Probably in that order. In the course of our fundraising, we have encountered several people who are affected by epilepsy, either themselves, family members or close friends. It has been nice to talk about something which is almost taboo, and lots of people have been pleased to help with our cause. At the time of writing we have raised over £1100, but are still hoping for more. If anyone would like to contribute to our total, we can be found on Just Giving at the following address:

We are so grateful for all your support! 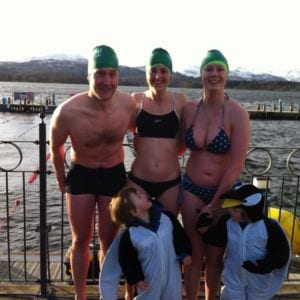 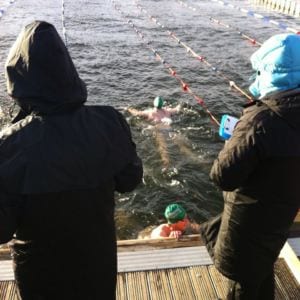