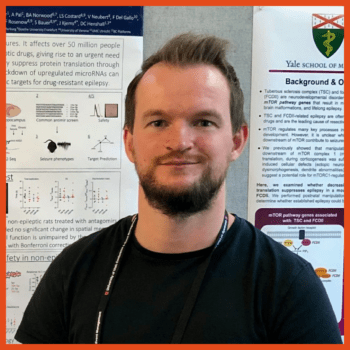 Despite extensive research, ~75% of people with temporal lobe epilepsy still experience seizures that can’t be well controlled with medication. Even when medication does control seizures, people can experience unwanted side effects.

I will learn exactly which types of brain cell are active in seizures, and how the molecules inside these cells change in epilepsy. Based on this, I will design a gene therapy that is only switched on when these molecules are present during seizures. The rest of the time it will be switched off and do nothing to the brain. This new technique could hugely refine how we treat temporal lobe epilepsy and other drug-resistant epilepsies. It could represent a ‘one-off’ treatment, and may mean that people with epilepsy no longer require medications to control their seizures.

I hope to complete initial pre-clinical testing within the 3 years of this fellowship. The host institute is already leading clinical trials of similar treatments, so we would have the infrastructure to move the new treatment directly to clinical trial in the medium term.