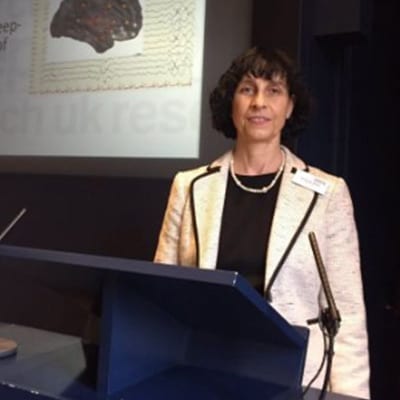 Sudden unexpected death in epilepsy (SUDEP) often happens during sleep. Investigating brain networks using brain scans acquired during sleep will tell us more about brain regions that are important for the heartbeat and breathing working together, and what may go wrong in people who later died of SUDEP. Understanding this is a vital step in getting closer to prevention.
Dr Beate Diehl

SUDEP is a devastating and tragic consequence of epilepsy, occurring when no other cause of death can be found. SUDEP often happens to young people, during sleep, but why this is the case is currently unknown.

In some people with epilepsy, the respiratory and cardiovascular systems do not work optimally, especially in sleep.  These processes are critical for survival, and are controlled unconsciously by several brain regions. Brain imaging, using novel means to evaluate activity between brain areas, combined with EEG measures, can study how inter-connections of those regions are altered in patients during awake and sleep states.

Dr Diehl and colleagues wish to see how parts of the brain controlling breathing and the heart “talk” with each other in people who later died of SUDEP, compared to those of living people with epilepsy, and how sleep affects this communication. They will use specialised MRI brain scans that have already been acquired in six different hospitals in the UK, France, Switzerland, Italy, Australia and Canada.  The international team will then apply sophisticated brain network analysis methods using the scans, to measure these interactions between the brain regions important for regulating heartbeat and breathing. They will also use EEG recordings acquired at the same time to detect sleep. Dr Diehl and colleagues will compare brain connectivity in people who later died of SUDEP with those of living people, during sleep and waking.

This study will identify how sleep affects brain regions and networks which control heartbeat and breathing, and will also help uncover why SUDEP frequently happens during sleep. Better understanding which brain regions and networks are affected in people who have subsequently died of SUDEP, may suggest ways to identify people at higher risk for SUDEP. This may in turn inform strategies to reduce epilepsy-related deaths.