Can the relationship between epilepsy and migraine help identify therapeutic targets?

Scientific title: How does cortical spreading depression relate to seizures?

“Epilepsy and migraine occur together more often than expected from chance: a diagnosis of epilepsy doubles the risk of migraine. The ‘aura’ of migraine is however very different from a seizure. Funding from ERUK will enable us to investigate the enigmatic mechanisms that predispose cortical neuronal networks either to seizures or to a slowly propagating wave of inexcitability typical for migraine aura.”

Epilepsy and migraine exhibit substantial similarities: they are both episodic, several anti-epileptic drugs are effective in migraine treatment, and both seizures and migrainous headaches can be induced by brain trauma. These similarities suggest that epilepsy and migraine share mechanisms in common. Indeed, mutations of the same genes can lead either to epilepsy or to a severe form of migraine with aura. However, the mechanisms that steer the brain to either a seizure or an attack of migraine remain very poorly understood.

Both focal seizures and some features of the aura (flashing lights or tingling sensations) that many people with migraine experience are due to excessive firing of neurons in the cortex. Why is it that this excessive firing of neurons, known as hyperexcitabilty, rapidly invades other brain areas in epilepsy but not in migraine? This is an important question that the researchers will try to answer in this project. In particular, they will try to understand why some brains are susceptible to seizures whilst others are prone to auras. Can some patterns of excitation trigger a seizure whilst others trigger the correlate of aura in the same brain? How do genetic alterations that lead to both epilepsy and migraine change the relationship between seizures and spreading depression? To answer these questions they will use methods developed in collaboration with other UCL researchers based on calcium imaging of neuronal activity in awake mice to image the development, propagation and termination of seizures with unprecedented spatial and temporal resolution.

Understanding the relationship between seizures and aura mechanisms will undoubtedly lead to new therapeutic targets for both epilepsy and migraine. It will also potentially shed light on the hypothesis that an aura-like mechanism plays a role in sudden unexpected death in epilepsy (SUDEP).

Image: A hippocampal neuron in culture from mice that have both epilepsy and migraine 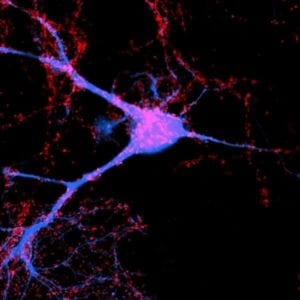