“I am interested in how the brain can handle an enormous amount of information with very little room for error. I believe that understanding how the brain can perform such an astonishing task can help us provide therapies to reduce the risk of seizures, which occur when the brain is incapable of maintaining its activity under control.”

Epileptic seizures occur when too many nerve cells are active at the same time. All nerve cells communicate with their neighbours by releasing chemicals called neurotransmitters. Inside nerve cells, these chemicals are stored in small compartments called synaptic vesicles. Recently, we found that epileptic brains reorganise their synaptic vesicles and we believe this may be an attempt to stop the nerve cells from firing at the same time (synchronously). Dr Marra wants to investigate the direct link between vesicle reorganization and epileptic seizures.

First, the researchers will investigate whether vesicle reorganisation is a common phenomenon across different forms of epilepsy. To do so, they will study mice with genetic mutations known to cause epilepsy in humans alongside models of acquired epilepsy. They will then record electrical activity directly from nerve cells in brain tissue obtained from healthy and epileptic mice. Using drugs that cause vesicle reorganization, researchers will then manipulate the position of vesicles and record electrical activity directly from nerve cells. If their hypotheses are correct, these drugs will have little or no effect on healthy tissue but will reduce frequency and length of seizure-like activity in brain tissue obtained from animal models of epilepsy.

Establishing the functioning of synaptic vesicles will greatly advance our understanding of the cellular and molecular bases of epilepsy. Most anti-epileptic drugs act on the electrical properties of nerve cells, affecting neuronal communication at all times. Organisation of synaptic vesicles is crucial only when activity becomes very high, which may be the brain’s strategy to reduce the risk of a seizure without affecting cognitive functions. In the long-term, researchers hope this study will provide new therapeutic targets for treatment of excessive neuronal activity in epilepsy and may prevent seizures.

This image comes from Dr Marra’s previous ERUK-funded preliminary study and shows the part of the synapse sending information (red) and the part receiving it (brown). Dr Marra is interested in the position of synaptic vesicles, the small circles in the red part of the synapse. The structure shown is over 100 times smaller than the very tip of an eyelash. 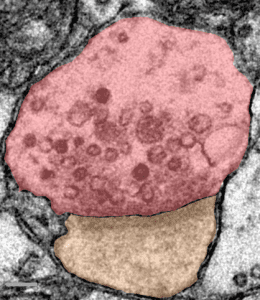