A new role for epilepsy gene

£20,000 pilot grant over 18 months awarded to Prof Peter Oliver at the University of Oxford

“Our work will help to understand the role of a new epilepsy-causing gene in neuronal cell communication. This new ERUK funding will allow us to investigate how changes in this gene that cause disease influence fundamental aspects of brain cell function that are also common to many other epilepsies.”

It is now possible to sequence human DNA much more quickly and cheaply than 10 years ago, and as a result, new genes that cause epilepsy are being discovered. One of the first that was identified using this method is called TBC1D24. Changes in this gene in some people cause a range of neurological disorders, including myoclonic epilepsy and Sudden Unexpected Death in Epilepsy (SUDEP). The function of this protein and why it causes epilepsy and other neurological problems is still not understood.

To investigate the role of TBC1D24 in the brain, the researchers have recently identified other proteins that can bind to TBC1D24 in neuronal cells. One of these is part of a large group of proteins that control the content of cellular ‘packages’ called vesicles. These structures are essential for normal cell function and also for communication between neurons. The researchers suggest that changes in TBC1D24 alter the movement and size of these vesicles, which results ultimately in seizures. They will study this using neuronal cells in a dish in addition to mice that contain the same changes in the TBC1D24 gene that are found in humans.

Errors in the communication between cells in the brain, are thought to cause the seizure events that occur in epilepsy. This project will help us understand a fundamental aspect of neuronal cell function common to all human disorders characterised by seizures. Investigating these shared pathways may lead to therapeutic targets applicable to patients in 5-10 years. 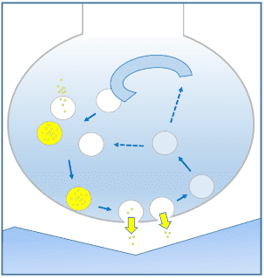