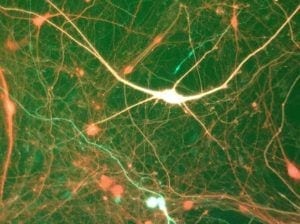 Neurons marked with fluorescence, which the scientists used for identification of specific classes of neural cells.

A new study published in the leading scientific journal PNAS may shed light onto why people with the same type of epilepsy-causing mutation may have symptoms that vary so dramatically in severity.Previous research has shown that mutations in a gene called SCN2A, which encodes for sodium channels found on the surface of cells, are the most common cause of genetic epilepsy. However people with the same mutation in the SCN2A gene may experience seizures of very different severity and frequency.Researchers think that this might be due to the effect of other genes known as genetic modifiers, which may be different between people.In the present study, a team led by Dr Alfred George Jr. at Northwest University in Chicago studied the variability in seizure severity using a mouse model of epilepsy. They compared mice that had different degrees of epilepsy severity even though they had the same mutation in the SCN2a gene. Importantly, the animals came from different laboratory strains and had different genetic backgrounds.When they analysed the properties of the animals’ brain cells, the researchers found that the brain cells of the animals more severely affected by epilepsy were more excitable than those of animals less severely affected.On further analysis, the researchers uncovered that sodium channels on the surface of these cells were behaving differently in more and less severely affected animals. This different “behaviour” was modulated by an enzyme called calcium/calmodulin protein kinase II (CaMKII).When they blocked the activity of the CaMKII enzyme, the researchers saw that the hyper excitability of the nerve cells was suppressed.They concluded that blocking CamKII activity could constitute a new approach to treat epilepsy.In a press release, Dr George said: “Not only did the findings explain the varying severity of epilepsy, but they also revealed a previously under appreciated pathway by which brain sodium channels are regulated — something that could be exploited for therapy.”The researchers are now working on finding out whether this result can be generalised to mutations on other genes and models of epilepsy.Author: Dr Özge Özkaya
February 15th, 2017|