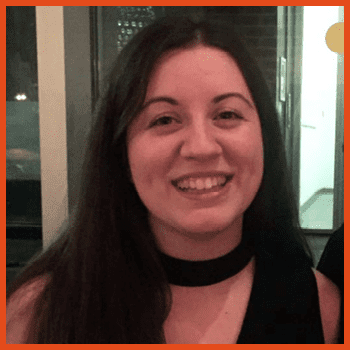 This week on the blog, Epilepsy Research UK supporter Paola shares her experience of living with epilepsy. Here she discusses how treatments were able to control her seizures until she started thinking about her future and the prospect of having a family. Paola also shares why research into epilepsy is important to her.

Like many, I wasn’t born with epilepsy. I was diagnosed when I was 19 years old.

I had just finished my first term at university and was home for Christmas. I went to a Christmas party and after the meal, I went home to sleep – nothing out of the ordinary. The next thing I remember was waking up in an ambulance and being told: “Paola you had a seizure!”. I was so confused. How did this happen? How did I get here? I was surprised to hear that I had walked downstairs into the ambulance – I had no recollection of this. I was not in control of my body.  Due to this being my first ever seizure I was told it could be due to “stress” and everyone can go through life with having one seizure. I had various types of scans and test which thankfully came back clear. Even at this point, I did not realise how serious epilepsy was. I was just in a daze attending scans or being hooked up with wires for monitoring.

I went back to university with a positive attitude as I wanted to move on and almost pretend the seizure never happened. Unfortunately, three months later, I had another nocturnal seizure. This time I was diagnosed with epilepsy and started medication. Again, I was told it might have happened due to stress. This made me angry, upset and confused. I had felt in control of my life, yet I didn’t know where this stress was coming from. I started to worry and fear sleeping in case I woke up in an ambulance again. From this worry, I was afraid I was causing myself stress, which could lead to a seizure. It was a vicious circle of thoughts! I started on Lamotrigine medication which has its side effects – I was unable to drive, and I felt like a burden to my flatmates who I had only known for seven months. I felt like my life was being interrupted exactly when I should have been embracing all of the opportunities ahead of me.

I had to learn that I can’t let epilepsy stop me. I needed to get on with my life. Of course, this is easier said than done. I eventually graduated from university and got a job I enjoyed. I felt like everything was finally stable and I was four years seizure-free. I wanted to try and come off my medication for several reasons – one of them being having children in the future. Weaning off medication was going well with six-monthly reviews with my epilepsy specialist. I was halfway to becoming fully free of medication when another seizure happened, yet again waking up in an ambulance. I felt like I had wasted five seizure-free years, my life was going to be on pause again and all the fear was flooding back.

I remember my consultant coming to see me in hospital and my dosage was raised again. I was about to go on a holiday of a lifetime, and I was worried that yet again epilepsy would interrupt my plans. I asked my consultant if I would be able to fly, and what if I have another seizure? She said ‘Why not? You must live your life, if it happens again, we deal with it again.’ I am now two years seizure-free and what my consultant said to me that day has stuck with me.  I try to remain positive but there is always that fear of the ‘what if’ that I have to live with.

Research is important to me as we must continue to understand why seizures happen and to give hope to people who live in fear that they can occur at any time, with no warning or signs. We must also continue to improve treatments and to reduce side effects so the medication itself doesn’t disrupt lives or affect future plans, such as having a family. With so many different types of epilepsy, there is even more need for research as one solution may not fit all. Currently, we can’t prevent epilepsy, but if there is more investment into research, a life free from epilepsy can one day become a reality.