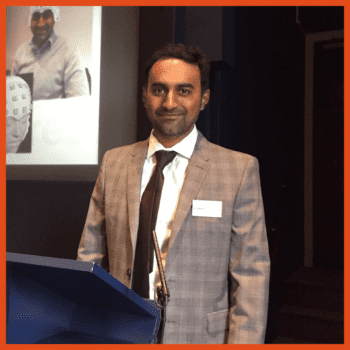 Bringing our Change Makers series to a close, this week we have ERUK Project Grant Awardee Dr Umesh Vivekananda. His transformative work involves applying a method based on technology used to detect submarines to record brain activity. This is a world-first and demonstrates the potential of research to revolutionise diagnosis for people with epilepsy and become a readily made clinical tool.

Every day in the UK 87 people are diagnosed with epilepsy. The pathway to diagnosis can often be lengthy, involving numerous tests and investigations.

Our team’s aim is to repurpose submarine technology that senses changes in the magnetic field to help in the diagnosis of epilepsy. The repurposing of drugs and methods has advanced medicine throughout history – a notable example was the fortuitous discovery of the bactericidal agent penicillin. We hope our method will too, advance the way in which patients with epilepsy are diagnosed.

One common diagnostic test for epilepsy is an electroencephalogram or EEG. Essentially this method detects movements of electrical current across the brain’s surface and is used to identify abnormal current patterns associated with epilepsy. However, EEG recording can often be affected by movement of the person or scalp muscle activity.

Alternatively, we are able to look at local changes in magnetic field caused by brain electrical currents, which is what Magnetoencephalography or MEG measures. MEG recording is not affected by motion or muscle activity. This approach has been used in selected epilepsy cases but has not been adopted more broadly as it is expensive and restrictive for the person as they have to have their head fixed within the scanner and cannot move.

To overcome these drawbacks, we aimed to perform MEG using a completely new method called Optically Pumped Magnetometers or OPMs.

These OPMs were originally developed to record fluctuations in the earth’s magnetic field for geophysical surveys and – in the military – to detect submarines!

Our team at UCL, working with scientists at Nottingham University, translated this technology so it can record magnetic fluctuations in the brain. Excitingly, this new OP-MEG system involves placing Lego block-sized sensors directly on the scalp, much like EEG, which allows patients to lie down or recline comfortably in a chair and move their head naturally while the technique is performed. As the sensors work at room temperature and can be attached directly to the scalp, it allows for more detailed brain activity to be collected. We can now also use motion sensing equipment to add information about a patient’s movement to our recording, meaning that it is less likely to affect this diagnostic test.

Earlier this year, our team was able to use the new OP-MEG system for the first time for a 47-year-old woman living with epilepsy.

This world-first case study was published in the journal the Annals of Clinical and Translational Neurology. We hope to be able to apply this submarine technology to more patients in the near future, and for it to become a readily available clinical tool used to diagnose epilepsy.