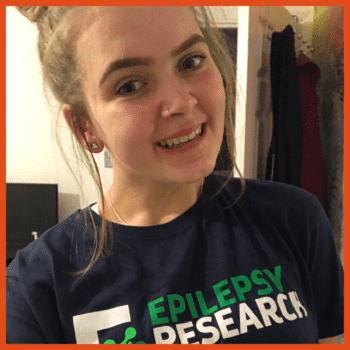 Rachel started having seizures when she was two years old. As she grew up, they became more frequent, and the drugs she was taking were failing to control them. Her epilepsy became so severe she was having as many as 30 seizures a day. In this Research Blog, Rachel shares how epilepsy surgery gave her a chance at living seizure-free.

Choosing to have surgery in an attempt to control my epilepsy was a scary decision my family had to make, but little did we know how life changing it would be. Thanks to ground-breaking research, 11 years later I am still seizure-free and living a life free from epilepsy.

I was only seven years old at the time, so I don’t recall things too clearly – everything is rather fuzzy pre-surgery. I started off at a local NHS hospital under a well-regarded consultant. I made a lot of progress there, but my epilepsy was so severe that I was referred to Professor Helen Cross OBE, the leading epilepsy consultant at Great Ormond Street Hospital (GOSH).

Before surgery, I was having lots of tests and visits to GOSH every few weeks, if not days, and this is where I met the most incredible staff and doctors. During this period, I was very subdued and bloated from the steroids and medication I was on. On the day of the surgery, I remember feeling very tired and lethargic as I was still having seizures in my sleep during the night. Because I had very little idea as to what was going on, I was feeling very scared, so I clung to my parents as much as possible. That is the last moment I can recall – the rest is a blur.

A piece of brain tissue the size of a 20 pence piece was removed during the surgery, and that was the moment my life changed. I recall waking up with the most painful headache I had ever experienced, whilst having a huge bandage wrapped around my head. I had roughly 50 electrodes fixed onto a silicone rubber skin that was connected to fibre optics, which was then connected to a computer monitoring my brain activity 24/7. I was like this for the next 3 weeks.

Just 24 hours after the surgery, the doctors and my family had already noticed a significant transformation and said I was like a different child. I was eating, playing, talking and eager to learn and see people. Post-surgery, I had to re-learn basic skills as well as literacy and numeracy, after 6 years of interrupted education.

What does epilepsy research mean to me? If I were to answer that 10 years ago, I would struggle to put it into words, and I still do now! Looking back, as a 19-year-old, it is truly astonishing how technology, medicines and research have progressed in that time, and it’s only going to get better from here. Along with the care I received in GOSH and the skills of the surgeons, I know that it was research that saved me. I am so grateful for the life that research and surgery have given me, and to be celebrating 11 years seizure-free.