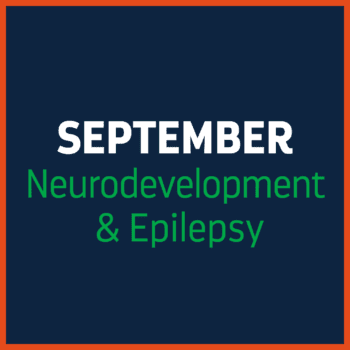 
Neurodevelopmental conditions such as autism are very common among people with epilepsy. But despite the strong link, we know little about the common underlying causes and how to best treat seizures in autistic people. This month on the Research Blog, we will focus on the link between epilepsy and neurodevelopmental conditions and how research could help more people live seizure-free.

Susanna was diagnosed with epilepsy at the age of three. It took 12 years before she was also diagnosed with autism, aged 15. “Growing up with uncontrolled epilepsy is hard enough. But doing so in a world that is so unsuitable for neurodiverse people makes it even harder,” she says. “And for the first 15 years of my life, I had to navigate it without any real understanding of myself. I had to work my way through the maze of life without any support.”

The lack of support Susanna received is mirrored by a lack of understanding of epilepsy and neurodevelopmental conditions like autism. What we do know is that these conditions often go hand in hand; as many as 40% of people with epilepsy are also on the autism spectrum. What’s more, epilepsy in autistic people is more likely to be resistant to standard treatments, and sadly, epilepsy is one of the leading causes of early death among this group.

Research should be helping people like Susanna control their seizures, providing more tailored treatments and better support. But despite 8.4 million autistic people living with epilepsy worldwide, people on the autism spectrum have often been excluded from epilepsy studies. As a result, we don’t fully understand why epilepsy is so common among autistic people, and how their seizures should be treated differently.

To begin to address this gap in our knowledge, last year we commissioned a new study with the charities Autistica and Young Epilepsy. The result of that study is a dossier called ‘Autism and Epilepsy: Laying out the evidence’, which will be published later this month. It was compiled by Dr Colin Reilly from University College London, with the help of autistic people with epilepsy and their families. In the dossier, Dr Reilly presents what we know (and don’t know) about epilepsy in autism and highlights important research questions for the future. Dr Reilly will share more about the findings in his blog post later this month.

One key aim of research in this area is to provide better diagnosis and treatment for epilepsy in autistic people. Signs of both epilepsy and autism often become apparent in early childhood. Therefore, it’s possible that early interventions in autistic children could lead to better control of their seizures.

Identifying these early signs is the aim of a research project led by Dr Charlotte Tye at King’s College London. She was awarded the Epilepsy Research UK & Autistica Fellowship to identify predictors of autism in infants with epilepsy. Dr Tye will explain in her blog later this month how this will improve long-term quality of life.

The dossier and joint fellowship with Autistica are the latest examples of our work on the link between epilepsy and neurodevelopmental conditions. The programme of work above stemmed from our 2019 International Expert Workshop on Epilepsy and Neurodevelopment, co-chaired by Professor Sameer Zuberi from University of Glasgow. In his blog later this month, Professor Zuberi takes us back to the outcomes of that meeting and brings us up to speed on how far we’ve come, and how much is left to do.

Susanna shares her own insights into life with epilepsy as an autistic person through her writing and media work, as well as working with the charity Young Epilepsy. In her blog post next week, she will explain more about how her epilepsy and her autism go hand-in-hand. “I don’t have a ‘main condition’,” she says. “Both affect me equally and that is what I’m most passionate about making the wider world see.”

Susanna is now pursuing a career as a researcher, another way she hopes to change people’s perceptions of her conditions. “Research is headed in the right direction,” she says. “The next step is to start researching people and their experiences as a whole, rather than as a list of symptoms that are attached to specific diagnoses. Once this happens, understanding will increase and we can begin to improve and adapt the world that we live in.”

Keep an eye on the Research Blog in September, where Susanna, Colin, Charlotte and Sameer will be discussing the link between autism and epilepsy. They’ll also be speaking at our Research Roundtable webinar later this month – sign up to our E:Bulletin to be notified when you can register for the session.