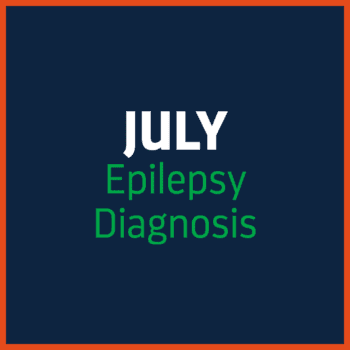 Getting the right epilepsy diagnosis can be challenging and can take many months or even years. This month on the Research Blog, we’re looking at why it’s so important that everyone gets the correct diagnosis as quickly as possible.

From shortly after he was born, Archer started having strange episodes. Right at the point when he was falling asleep, his whole body would spasm, and his eyes would make unusual movements. As the days and weeks went on these episodes got worse and worse, and his parents Amanda and John became increasingly worried. For the doctors to work out whether Archer had epilepsy, they needed to see these episodes for themselves. However, they rarely happened during medical appointments.

When it comes to epilepsy, making the right diagnosis is crucial, but it can be a difficult balance. On the one hand, diagnosing epilepsy quickly can mean treatment can begin straight away. This could improve the quality of life and reduce the long-term impact of epilepsy on children. But on the other hand, episodes that look like epileptic seizures can in fact have other causes. An incorrect diagnosis of epilepsy can mean unnecessary medication, with all the side effects but none of the benefits, and meanwhile, the real cause goes untreated.

This is why for many people with epilepsy, it can take months or even years to get an accurate diagnosis. At Epilepsy Research UK, this is something we’re determined to change. That’s why we have invested over £1 million into research to achieve an earlier diagnosis for people with epilepsy.

Archer was eventually diagnosed with a type of epilepsy called infantile spasms at the age of eight weeks old. This was thanks to a new tool called vCreateNeuro, developed by Professor Sameer Zuberi with support from Epilepsy Research UK. vCreateNeuro is a video sharing platform that enables parents and carers to securely upload videos of episodes, to be reviewed by doctors to help them diagnose (or rule out) epilepsy. In their blog later this month, Amanda and John explain how sharing videos via vCreateNeuro helped Archer and could help others in a similar situation.

One of the gold-standard methods for diagnosing epilepsy is to record brain activity during a seizure with an electroencephalogram, or EEG. However, by their nature seizures can be unpredictable, so it can take a long time and many attempts to get an EEG recording of a seizure as it is happening.

But what if there was a way to diagnose epilepsy without having to capture a seizure? What if you could use a standard EEG of the brain ‘at rest’ instead? This is what Dr Wessel Woldman and Professor John Terry are aiming to do with their research. In their blog later this month, they discuss how their research, funded by Epilepsy Research UK, uses mathematical computer models to estimate the chances of a person having focal epilepsy from a resting EEG. This will hopefully lead to a faster and more accurate diagnosis.

Rapid diagnosis of epilepsy is also important in emergency situations. When paramedics attend to someone who has lost consciousness, they must quickly determine whether it was caused by an epileptic seizure or not. New technology may be able to help – one example is research led by Dr Eleonora Lugarà, who is developing a ‘breathalyser’ test inspired by the incredible abilities of sniffer dogs. Eleonora explains more about her Epilepsy Research UK-funded work later this month on the blog.

Thanks to Archer’s prompt diagnosis, he was admitted to the hospital to start treatment and is now doing well. There is of course much more to follow once someone has been diagnosed with epilepsy, and for some, there will be many more challenges ahead. But getting the right diagnosis is the best possible starting point for that journey.

Keep an eye on the Research Blog during July, where Amanda and John, Wessel and John, and Eleonora will be sharing their views on epilepsy diagnosis. They’ll also be speaking at our webinar later this month – sign up to our e:bulletin to be notified when you can book tickets.