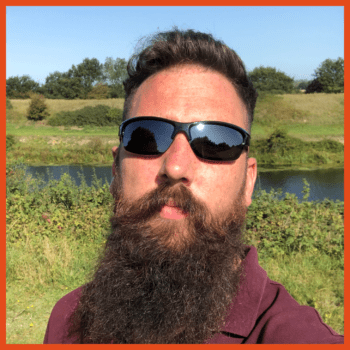 Craig is a Master Technician for a car company and lives in Norfolk. In this Research Blog, he discusses his journey from being diagnosed at a young age with a form of epilepsy with a probable genetic basis, to the challenges he has had to overcome and his hopes for the future of research.

I was diagnosed with epilepsy when I was four years old. I was too young to understand when I first received the news, but all through my youth I was terrified by my condition. Seizures began at a varied frequency, ranging from one a week to one every few months.

Over the years the triggers and symptoms have changed in various ways. First the migraines stopped, and the main cause was photosensitivity and sleep patterns. Then over time the issues moved to sleep and stress. The medication was always trial-and-error. I would take meds then go back after a couple of months to retake the test again. I was put on a medication when I was 14 and had no further tests until recently.

My grandfather also lived with epilepsy, and like mine, his interruptions were caused by poor sleep patterns. He would be in similar situations to myself, like having a bad night’s sleep or waking up early before having a seizure. Whenever asked by doctors about family history, we always mention my grandfather. The doctors said his epilepsy was likely to be genetic, but it wasn’t until later that I developed similar symptoms to him. Mine, however, were more frequent and my seizures were worse. He also didn’t have the memory problems I have.

I felt better knowing my epilepsy could be genetic, mainly because I had a glimpse at what to expect, although my condition was more severe. The doctors have said there is a link between his epilepsy and mine, but I can’t get more information about his condition from him as, unfortunately, he is no longer with us.

My seizures came back much more frequently in May 2020, meaning I had to have another EEG and medication change. I had 3 seizures in one day and I ended up in hospital due to a head injury. At all other times, my epilepsy has been managed at home by my parents, and now my wife, so there was no need for trips to A&E.

Epilepsy affects life greatly. Firstly, being isolated and not being able to live a ‘normal’ life is tough. The older I got the more troubles I’ve had with depression. Battling the everyday issues. My biggest problem is memory loss, mainly short term, which is worse when I’m tired and can cause many obstacles throughout each day. My concentration levels are low. All this is on top of the fatigue, which I experience daily.

These factors make everyday tasks much harder than for those without the condition. Finding a good career can be a challenge. I am a Master Technician for a Volvo dealership; gaining that qualification was very hard, let alone with memory and concentration issues.

I think it’s important to find new medications and treatment options, but also just as important to help those with everyday obstacles. There is very little support for people and at no point have I ever been offered help with depression or memory loss. Epilepsy has very little presence on social media and this lack of visibility leaves people feeling very alone. It’s a truly unspoken illness.

I’ve been involved in conversations where people have insisted that when someone is having a seizure, they should be held still to stop them from causing injury; as you know, this is the worst thing you can do. I believe it’s gaps in knowledge like this which are an issue.