Why do patients with brain tumours experience seizures? 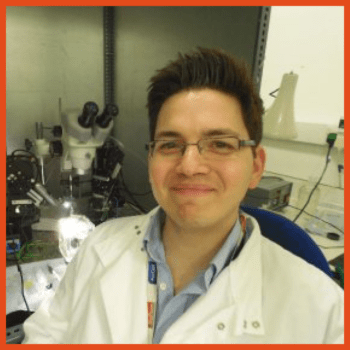 Acquired Epilepsy
Why do patients with brain tumours experience seizures?

Mr Ashan Jayasekera is a trainee neurosurgeon based in Newcastle and was awarded an Epilepsy Research UK Emerging Leader Fellowship in 2018. His research investigates a new surgical technique used to treat seizures in patients with brain tumours – but why do seizures often arise as a result of a brain tumour? In this blog, Mr Jayasekera gives an overview of the link between brain tumours and seizures and shares how his research could lead to more successful surgeries for patients.

Seizures are very common in patients with brain tumours, and they are very difficult to treat. Surgery remains the mainstay for treating most brain tumours, but despite this, surgery to treat seizures themselves is limited because we still don’t have a reliable and safe way of finding out where they start.

One of the things that I found most striking when I started seeing patients with brain tumours was how affected they were by their seizures.  And that’s borne out in the literature. Seizures are very common in patients with a particular kind of brain tumour called a glioma, and they are often very difficult to treat as well as having the biggest bearing on quality of life. The aim of treating gliomas has often been centered on trying to safely remove as much of the tumour as is possible, without injuring surrounding healthy brain, to try and extend life.

But it turns out that surgery is also a very effective way of treating seizures. Those patients who have as much tumour removed as is safely possible are less likely to have seizures after their operations. But removing the tumour alone is often not enough because the seizures themselves don’t start in the tumour; they start in the part of the brain next to the tumour. This is where the tumour cells interact with the brain and make it more excitable and predisposed to seizures. This poses a problem to the surgeon: which bits of surrounding brain should they remove to render a patient seizure-free? How much do they need to remove? Traditionally surgeons have worked in conjunction with neurophysiologists to map the areas of seizure generating brain, by placing grids of electrodes around tumours and looking for any abnormal electrical activity. However, doing this involves another operation that carries risks and it’s not yet clear how effective this method is.

Ideally, we need a non-invasive means of mapping those bits of the brain around a tumour responsible for seizure, so that surgeons can be guided on which bits of brain to resect to stop the seizures.  But we need a few things to be able to do that.  We need some kind of marker that indicated which bit of brain is responsible for patient’s seizures. We need a means (a scan or some other investigation) that allows us to look for this marker. Then the science bit, which is demonstrating that this marker does tell us which bits of the brain are generating seizures.

One such marker might be a neurotransmitter called glutamate. Neurotransmitters are how one brain cell communicates with another and glutamate is an example of an excitatory neurotransmitter, meaning it stimulates the next brain cell and tells it to fire. It turns out, glioma cells (the tumorous cells) can often produce glutamate and release it into the surrounding brain, and it may well be that this excess glutamate is responsible for seizures. You can look for how much glutamate there is in the brain (means) using a special kind of MRI scan called MR spectroscopy, which compares the chemical composition of normal brain tissue with abnormal brain tissue.

This is where my research – very generously funded by an Epilepsy Research UK Emerging Leader Fellowship Award – comes in. I wanted to demonstrate that areas of brain around a tumour with high levels of glutamate could be responsible for generating seizures. As part of the research, patients would have MR spectroscopy scans prior to their surgery, and a sample of tissue would be taken to the lab to look for any spontaneous seizure activity. What I discovered is that tissue with spontaneous seizures in the lab is from areas of the brain around a tumour with high glutamate levels. This is the first time this has been demonstrated and is the first step in showing that we can use MR spectroscopy in mapping the areas of brain responsible for seizures in patients with gliomas.

Being given an Epilepsy Research UK Emerging Leader Fellowship Award enabled me to pause my clinical training and focus on an area of research that I strongly feel is an unmet need; treating seizures in patients with brain tumours. I have thoroughly enjoyed my fellowship and I am grateful to the hardworking and generous supporters of the charity for funding this important area of research and me as an aspiring clinical academic. Working with patients who give up their time so generously to be part of research is an ongoing privilege and the driving force for me personally to carry on this work.