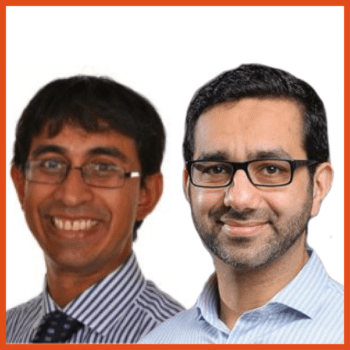 In this Research Blog, we catch up with Professor Sarosh Irani and Professor Arjune Sen from the University of Oxford. Thanks to funding from Epilepsy Research UK, the research group, led by Professor Bethan Lang, helped provide evidence for a link between autoimmunity and specific types of epilepsy with implications for new, targeted treatment options. Here, Professor Irani and Professor Sen explain how the group helped build research momentum in this area.

Professor Lang said “when we first suggested that autoimmunity could have a role in epilepsy, we were told that it was unlikely and we were roundly dismissed. But through the foresight of Epilepsy Research UK’s funding in 2008 and 2012, we have been able to show that autoimmune antibodies (autoantibodies) do play an important role in some forms of epilepsy.”

The International League Against Epilepsy now recognise ‘immune’ causes of seizures in the most recent classifications of epilepsy. Studies in patients with very frequent seizure syndromes – often diagnosed with autoimmune encephalitis (brain swelling) – have shown that treatments with medications that modulate the immune system are highly effectively used to treat some forms of seizures. The aim of this study was to ask how frequently this occurred in unselected people first presenting with epilepsy.

But how exactly is the immune system linked to epilepsy?

Sometimes the immune system becomes over-excited and, in error, antibodies are made against a target in our own tissues, rather than against the infection. If this “autoimmune” reaction is against targets in the brain, the autoantibodies can lead to seizures.

Through a study funded by Epilepsy Research UK, we were able to show that autoantibodies against certain brain proteins were present in several people with epilepsy. We did this by enrolling over 200 people with different epilepsies and collated their clinical histories, routine test results and antibody status. Our analysis found evidence of seizure causing autoantibodies in around 10% of our cohort.

What does this mean for people living with epilepsy?

Thanks to the foresight of ERUK, this research has already led to significant change in clinical practice, in that we are able to use tests for specific autoantibodies linked to epilepsy, so we can ensure the correct and appropriate treatment is administered as soon as possible. In addition, these autoantibodies are often considered the causative agents, hence allowing people with epilepsy to understand the actual underlying cause of their condition.

We are now investigating how far these findings extend to people with other forms of seizures. This would help clinicians identify who might benefit from immunomodulatory therapy and focus their treatments on the seizure causing autoantibodies.