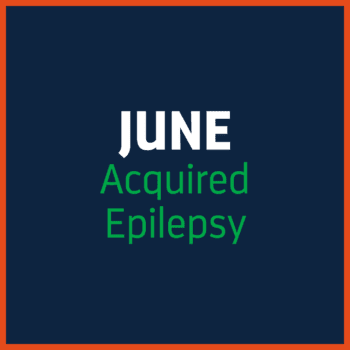 Epilepsy can be caused by many factors, including other medical conditions and brain injuries. This month on the Research Blog, we will look closer at acquired epilepsy, and how our research is helping the full spectrum of people living with the condition.

When she was 24, Anna suffered a head injury after her car was hit by a careless driver. She developed epilepsy as a result, which even years later still affects her life in many ways. “It has stopped me from getting the job I wanted in the RAF. It has affected my relationships as I am so emotional and stressed out… I still have to push myself to go out and do the things that I enjoy.” In her blog next week, Anna will explain more about the ongoing impact of her accident and epilepsy.

For 65% of people living with epilepsy, the condition has been a dominant part of their life, but the cause of their epilepsy is unknown. But for others, like Anna, their epilepsy is an unexpected consequence of something else they’ve experienced. There are many things that can lead to these ‘acquired’ forms of epilepsy, including infections, injuries, stroke, and neurodegenerative diseases like Alzheimer’s. Epilepsy Research UK is funding a wide range of research to understand epilepsy within these different contexts.

Particular types of brain tumours called gliomas are known to increase the chances of epilepsy. The treatment for epilepsy is the same as for the tumour: remove the part of the brain that’s causing the problems. However, finding the tissue around the tumour that is causing seizures can be difficult and invasive. Mr Ashan Jayasekera, a surgeon based at Newcastle University, is developing a non-invasive technique using MRI scans to pinpoint which parts of the brain need to be removed, as he will explain in his blog later this month.

Epilepsy can be caused by complex interactions between conditions which at first might seem unrelated. For instance, people with Down syndrome have a high chance of developing dementia before the age of 65. They often also develop late-onset myoclonic epilepsy, further affecting their quality of life. Dr Frances Wiseman, based at University College London, is trying to understand why people with Down syndrome who develop dementia are also likely to develop epilepsy and will provide an update on her research later this month.

Although epilepsy affects people with a range of conditions, the silver lining is that knowledge from one area of medicine could provide new insights into epilepsy. Take the example of autoimmune conditions such as rheumatoid arthritis and type 1 diabetes, caused by the immune system attacking parts of the body by mistake. Thanks to funding from Epilepsy Research UK, a team of researchers in Oxford found evidence of a link between autoimmunity and some types of epilepsy, leading to new, targeted treatment options. Researchers from the Oxford Autoimmune-Associated Epilepsy Research Group will explain more in their blog later this month.

Through hearing from supporters like Anna, and through the Shape Epilepsy Research Network, Epilepsy Research UK understands the impact that epilepsy can have on a person’s life. We must fund research to understand epilepsy in different contexts, to provide support to all people living with epilepsy, no matter how it was caused. Their experiences, and knowledge gained by bringing in people from different areas of medicine, will benefit everyone with epilepsy.

Follow the Research Blog during June to read blog posts from Anna, Ashan, Frances, and Sarosh, who will be sharing their perspectives on acquired epilepsy.