On Thursday 15th March Epilepsy Research UK went on tour to Newcastle to visit some of our regional researchers and supporters.Since 2009, Epilepsy Research UK has funded 4 research projects at Newcastle University, and so we were delighted at the opportunity to visit the Institute of Neuroscience to hear about some of their recent work.Speaking at the event Professor Andrew Trevelyan, Professor Mark Cunningham, Dr Rhys Thomas, and Dr Rob Forsyth, described their work with Epilepsy Research UK, as well as some of their recent findings and ongoing projects, and the potential impacts on the lives of patients living with epilepsy. We also heard from Andy Trafford, Managing Director of MacDonald Martin Ltd, who described his company’s fundraising efforts and their personal connection with epilepsy that has motivated them to do so.Attendees, including supporters of Epilepsy Research UK, were then able to look behind the scenes as we were treated to a tour of the laboratories where epilepsy research is conducted. Everyone was extremely impressed by the expertise and technical abilities on show, and by the high standard of research taking place.We were even able to see and hear what the electrical signals from the brain during normal activity and during an epileptic seizure look and sound like when they are picked up by a computer!Here are a selection of photos from the Newcastle event:Professor Andrew Trevelyan was awarded a fellowship grant by Epilepsy Research UK in 2009, and then a project grant in 2015. His research has looked at why head injury such as stroke, infection, or head trauma, causes epilepsy. He spoke with attendees about his lab’s research and the work of Epilepsy Research UK: 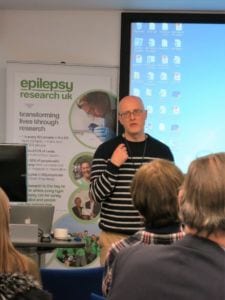 Dr Rhys Thomas was awarded a pilot grant  on juvenile myoclonic epilepsy from Epilepsy Research UK in 2011 whilst working at Swansea University. He said “Epilepsy Research UK took a risk on me when they awarded me pilot grant funding in 2011. This risk enabled me to apply for further, larger amounts of funding and progress my career.”  He recently moved to Newcastle University, and is an honorary consultant in epilepsy at the Royal Victoria Infirmary. His research focuses on the genetic causes of epilepsy: 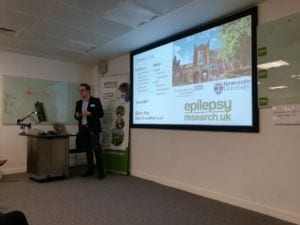 Professor Mark Cunningham is a Professor of Neuronal Dynamics at the Institute of Neuroscience, spoke about research he has completed, and about the different research grants that ERUK funds. Prof Cunningham has been a member of our Scientific Advisory Committee (SAC) since 2015. The SAC advise the charity on all scientific matters and decide which research grant applications are funded each year. (For more information on how the SAC identify the best research to fund, see the Spring 2018 edition of Focus, the ERUK newsletter, here.) 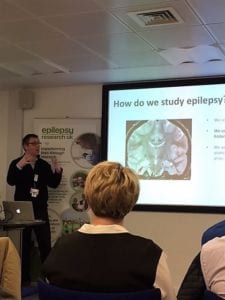 Dr Rob Forsyth is a specialist paediatric neurologist and senior lecturer at Newcastle University. He was awarded a pilot grant in 2011 on carbogen for treating children with non-convulsive status epilepticus: 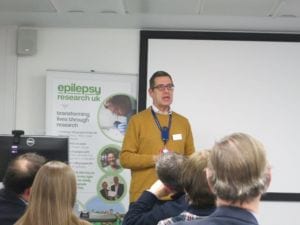 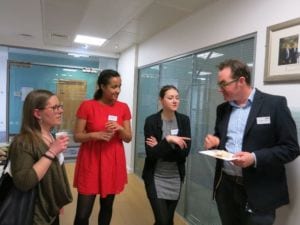 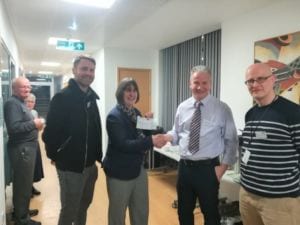 Prof Mark Cunningham taking a group of ERUK supporters on a tour of the epilepsy labs at Newcastle University: 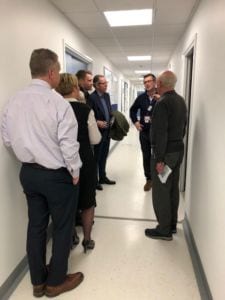 Connie is a PhD student in Prof Trevelyan’s lab where she researches the interactions between different cortical cell types, with a focus on what is happening in the epileptic brain. She does this by investigating how neuronal systems try to withstand/prevent epileptic patterns of activity or how, by their activity, they promote these events. 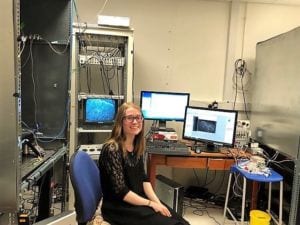 Here Connie is demonstrating to supporters in the lab how they can visualise and manipulate the activity of fluorescently-tagged brain tissue using optogenetic (light-activated) proteins: 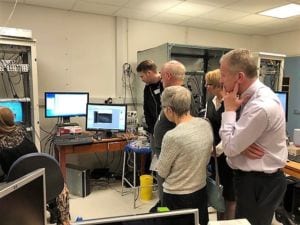 Postdoctoral fellow Dr Ryley Parrish was also able to demonstrate his work on shifting changes in extracellular potassium during epileptic events. Riley won the Basic Sciences Presentation Prize at the UK chapter meeting of the International League Against Epilepsy in 2016. The prize is funded by ERUK. 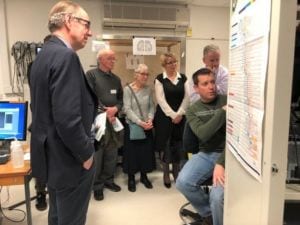 PhD student Anderson and Prof Mark Cunningham were able to show supporters what the signals created by brain tissue during an epileptic seizure look and sound like when transmitted by a computer: 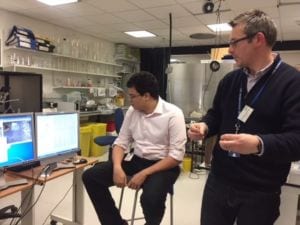 A big thank you to our speakers Professor Andrew Trevelyan, Professor Mark Cunningham, Dr Rhys Thomas, Dr Rob Forsyth and Andy Trafford, to Dr Ann Fitchett for her help in organising the event, to the staff in the laboratory who showed us around, and to our supporters who attended the event, and without whom this research would not be possible.If you would like to be contacted regarding future Meet a Researcher events in your region, you can sign up to our online newsletter here.