On 25th June, Epilepsy Research UK was invited to speak at the launch of Evidence Week in the Churchill Room at the House of Commons. Evidence Week, run by the organisation Sense About Science, aimed to convince politicians to make good use of evidence and expertise to help shape regulations and policies. The launch was attended by MPs, peers, and parliamentarians, as well as representatives from charities, businesses, and academia, who all came together to discuss the importance of evidence. 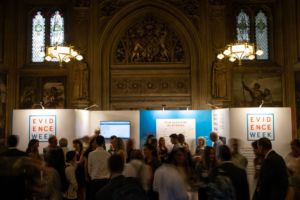 Our Research and Information Manager Caoimhe attended the event and gave a statement about epilepsy, the work of ERUK, and the recent media coverage on Billy Caldwell and medical cannabis. She said:“Epilepsy Research UK is the only national charity in the UK exclusively dedicated to funding independent research into the causes, treatment and prevention of epilepsy. Epilepsy tends not to get a lot of media attention compared to other conditions, despite 600,000 people in the UK living with epilepsy. We think this is because many assume that people with epilepsy can simply take medication to prevent seizures. Sadly, this is not the case.

“The recent case of Billy Caldwell has illustrated how desperate epilepsy can be. It is ironic that he has had difficulty getting the cannabis derivative that has helped him, when the UK has actually led the world in research into the use of cannabis and its derivatives for epilepsy. However, in many ways Billy is fortunate, as almost a third of people with epilepsy do not find anything that can stop their seizures. Epilepsy can thus have a devastating effect on people’s lives. In fact there are 21 epilepsy related deaths in the UK every week. Evidence has indicated that it is not just newer drugs that are important but also appropriate specialist epilepsy services that can reduce morbidity and mortality. Such evidence has driven health care policy in providing access to specialist services and new treatment approaches.”