On Wednesday 26 September, Epilepsy Research UK travelled to Birmingham to host an evening together with some of our regional researchers and supporters. The annual ILAE (International League Against Epilepsy) conference was taking place, so it was a great opportunity for us to see our researchers!

ERUK Research Manager Caoimhe Bennett put together a programme of speakers for us to hear the exciting latest news from some of those whom we have recently funded.ERUK Chair of Trustees Professor Matthew Walker hosted the evening, and first up was Dr Sukhvir Wright, from Aston University and Birmingham Children’s Hospital. Dr Wright was awarded an ERUK Fellowship in 2016 titled: The Immune System and Epilepsy – Exploring Unanswered Questions. 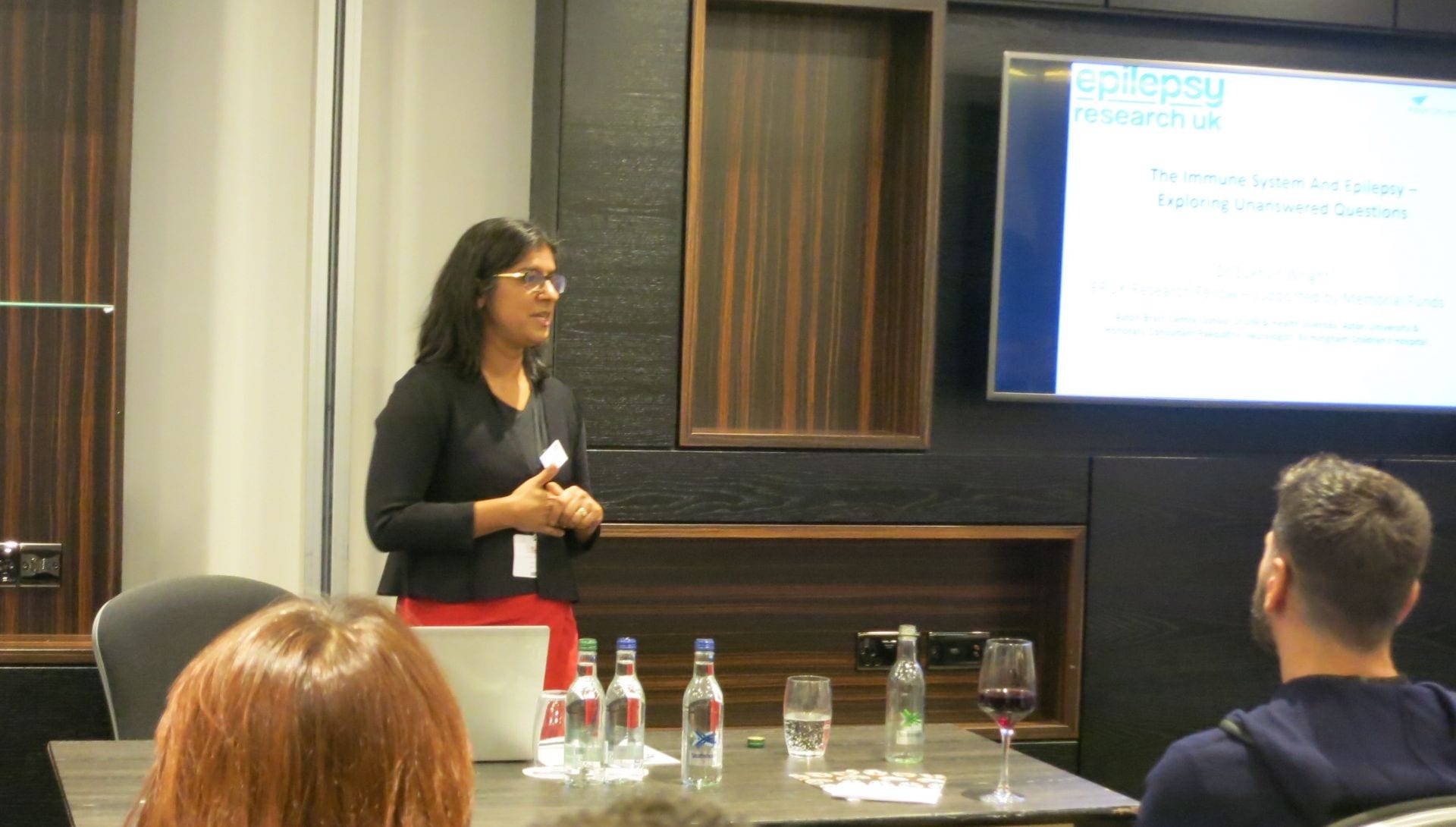 Dr Wright told us about how the immune system may play a role in epilepsy, and how her research may enable the development of new treatments for epilepsy in the future. You can read about Dr Wright’s fellowship research here.During the conference, Dr Wright was awarded the prestigious Celine Newman Basic Science Award, for her presentation at the Epilepsy Research UK Basic Science Session. Her presentation was very well received by all in attendance. Well done Sukhvir!Next we heard from Dr Seo-Kyung Chung, Senior Lecturer in Molecular Neuroscience, Swansea Medical School. Dr Chung was also awarded an ERUK Fellowship in 2011, titled: An Investigation Into Absence Seizures, which you can read about here. 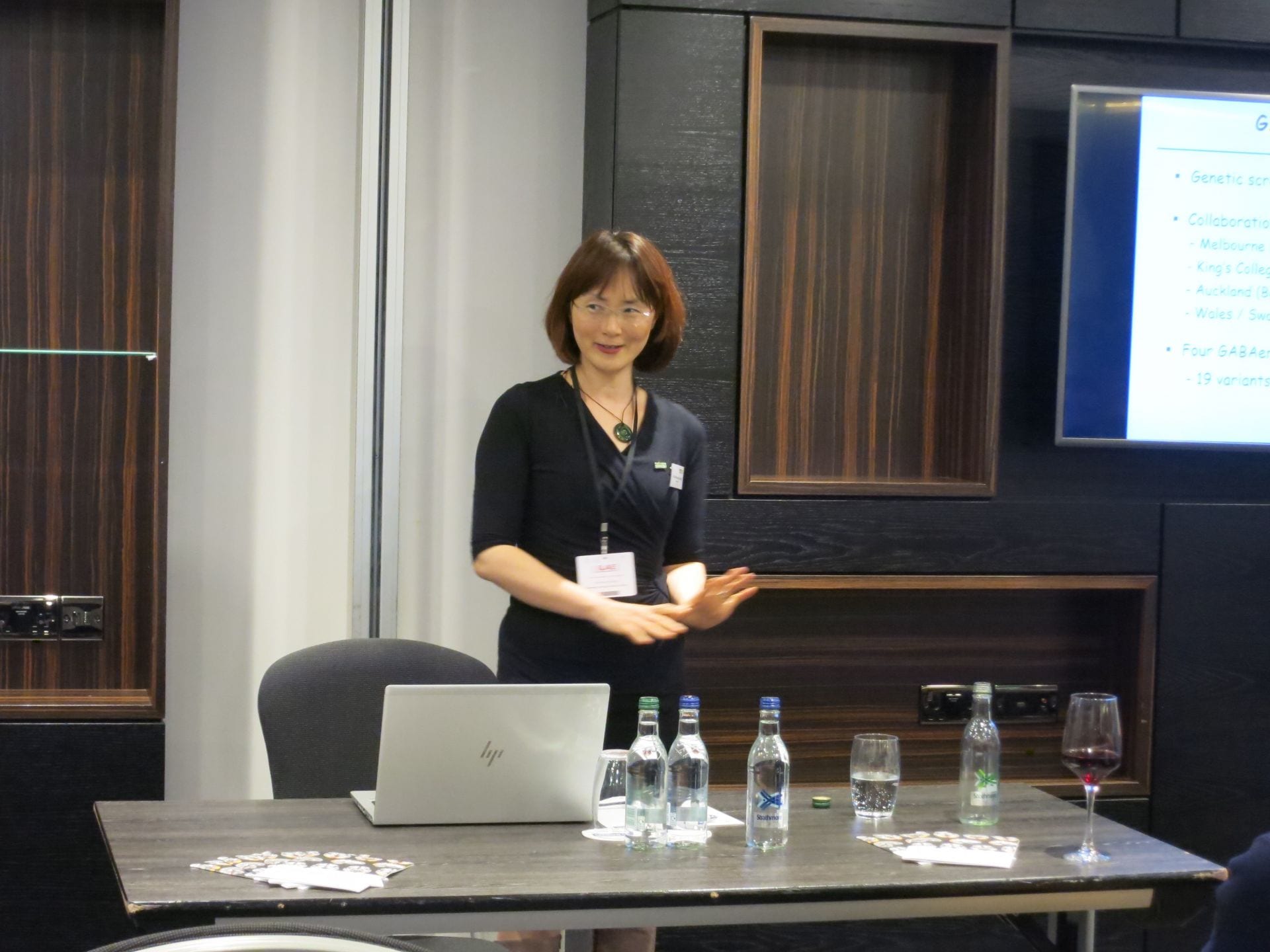 Dr Chung told us about her work, but also how much her ERUK fellowship helped to develop her career as a leader in epilepsy research.Professor Peter Oliver, Associate Professor of Neuroscience, University of Oxford spoke next. Professor Oliver was awarded an ERUK pilot grant in 2018 titled. A New Role For Epilepsy Gene which you can read about here.  This fascinating work may help us to identify how epilepsy occurs in people with a mutation in gene TBC1D24. 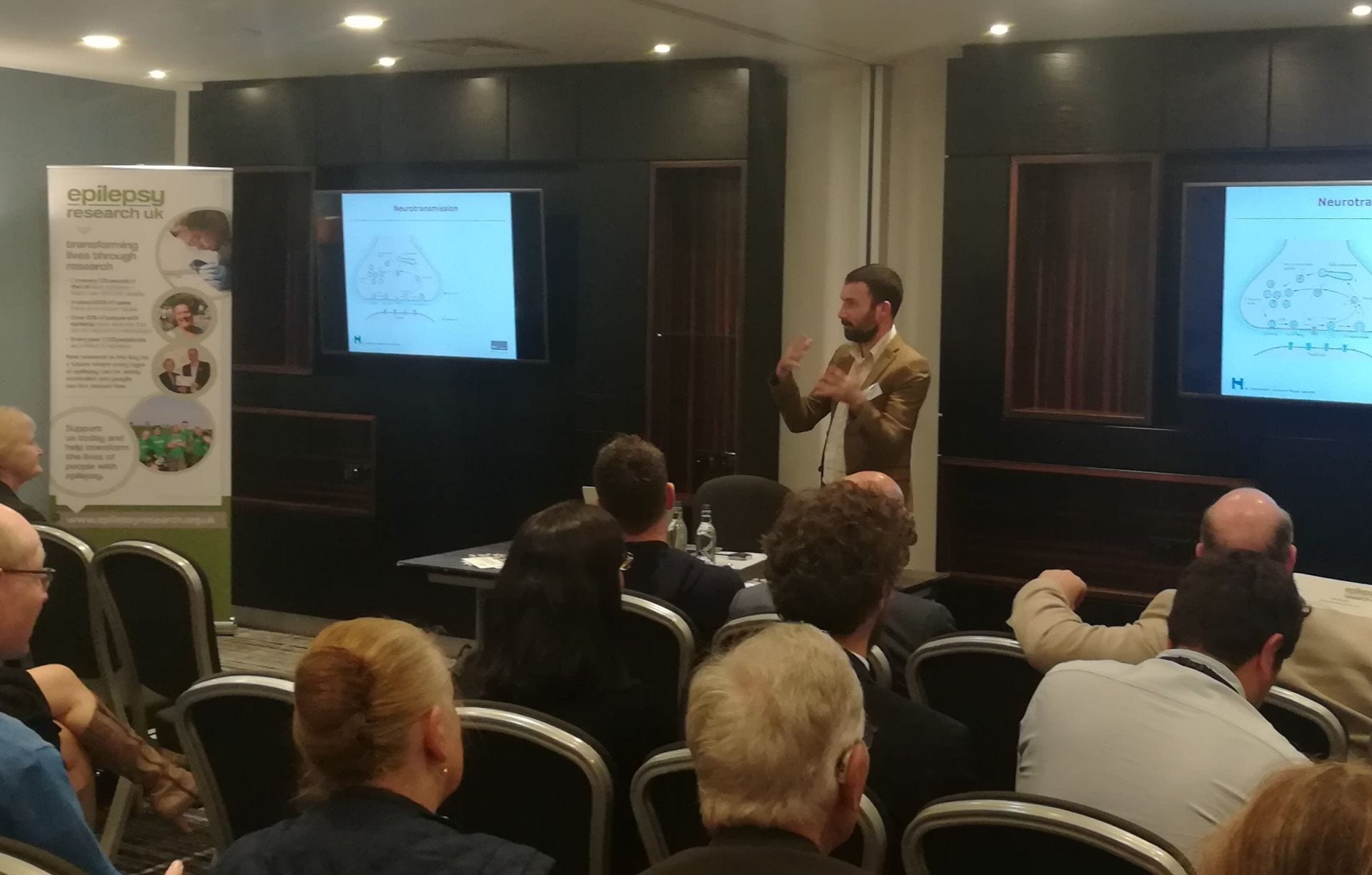 Dr Gabrielle Lignani was our penultimate speaker. He was also awarded a Fellowship in 2017 entitled: GeneLoop: gene therapy activated by seizures to treat epilepsy, which you can read about here. Dr Lignani’s innovative work may offer strategies and new treatments to prevent seizures in the future. He said “Being awarded an ERUK fellowship had been the highlight of my career”. 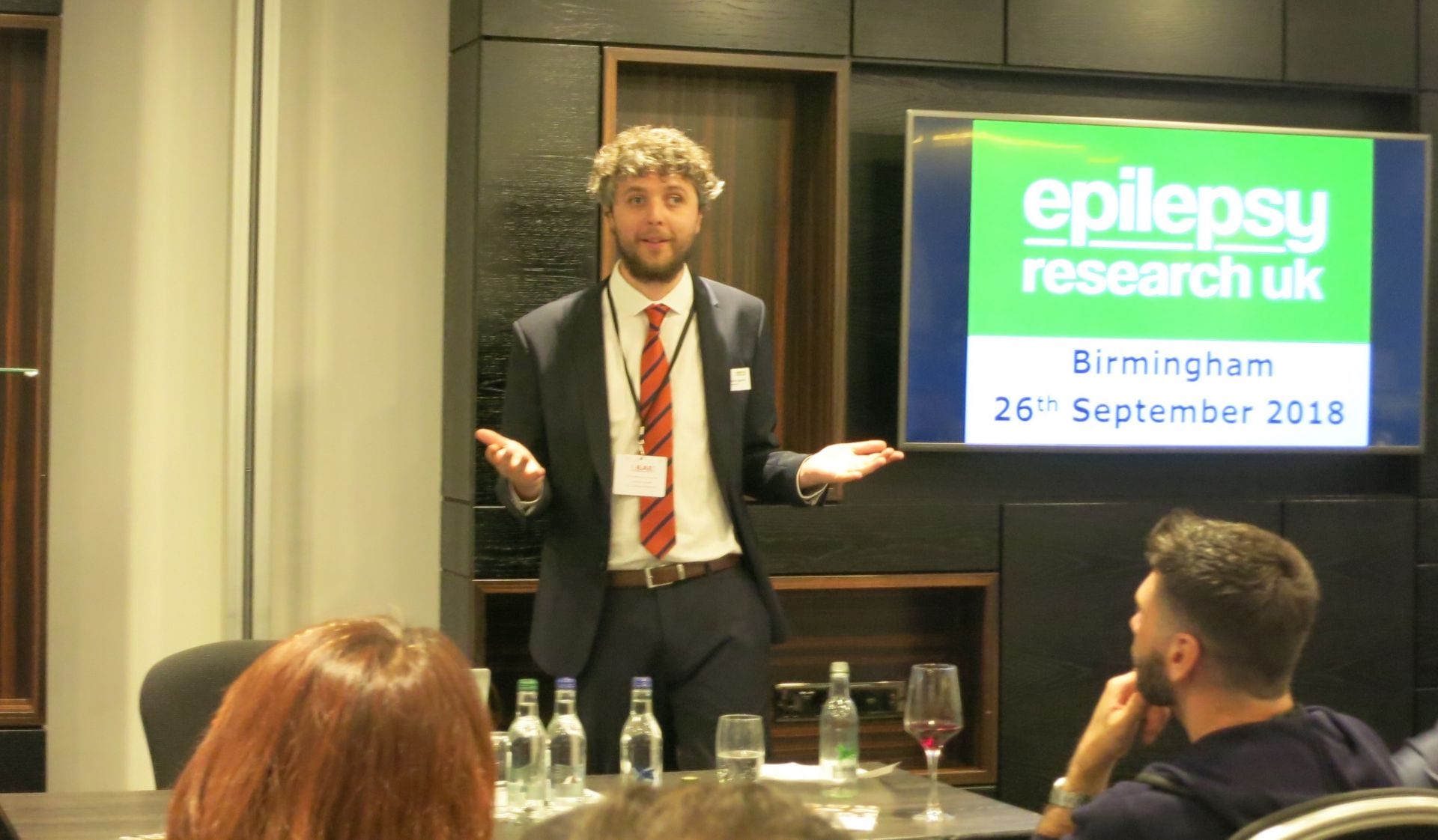 Finally, we heard from Professor Andrew Trevelyan who co-organised and spoke at our Newcastle event in March 18. He was awarded an ERUK Fellowship in 2009, which was a pivotal point in his career, Professor Trevelyan was also awarded a project grant in 2015. He spoke about the value of ERUK fellowship grants, which often result in future leaders in Epilepsy Research. He thanked the supporters for their fundraising efforts and for continuing to fundraise, saying “The seed of funding provided by Epilepsy Research UK at a crucial time in my career has evolved into a major research effort for epilepsy.” 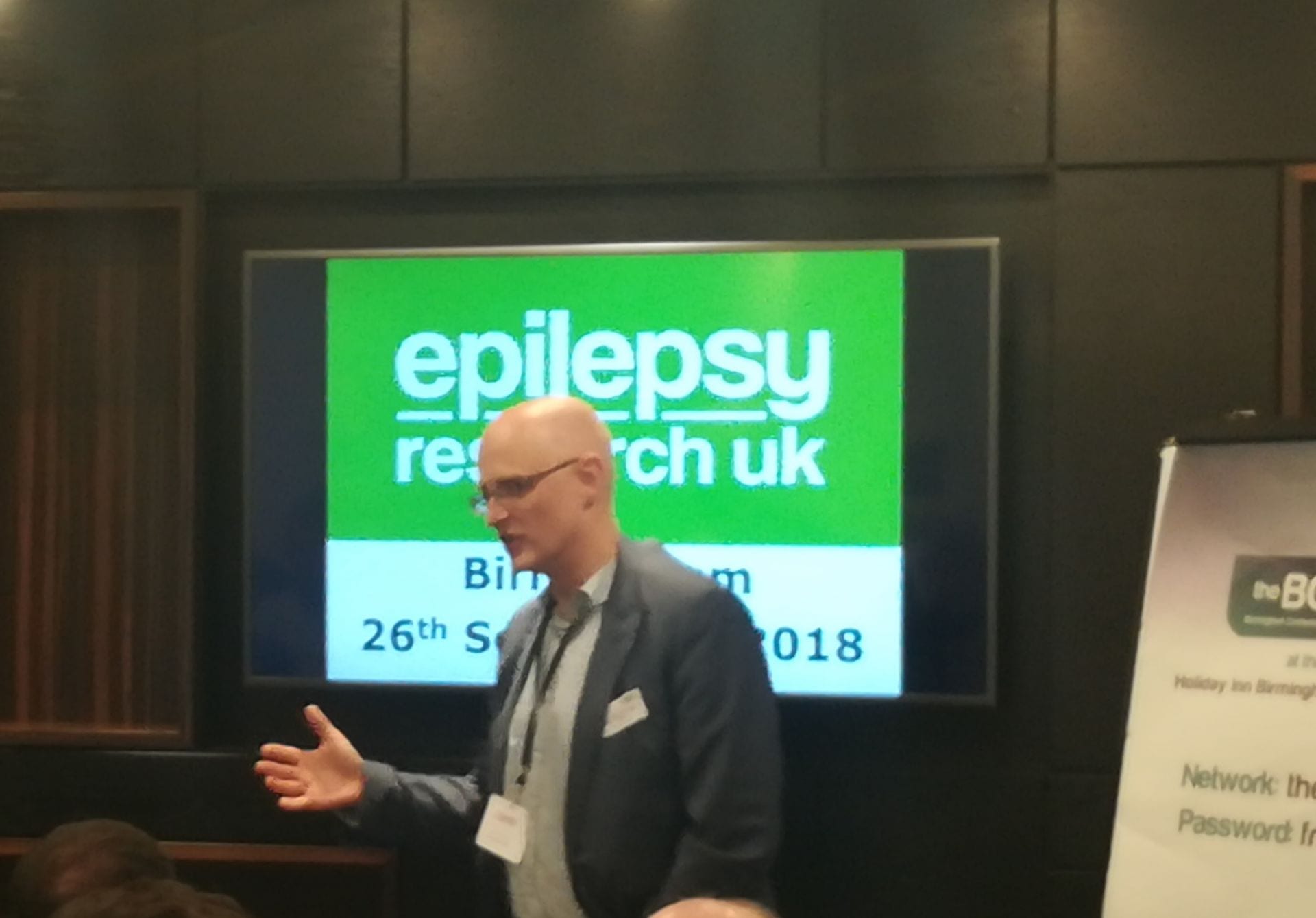 To conclude our evening, Professor Walker introduced Maxine Smeaton, ERUK’s new Chief Executive who re-iterated Professor Trevelyan’s words of thanks to our supporters. 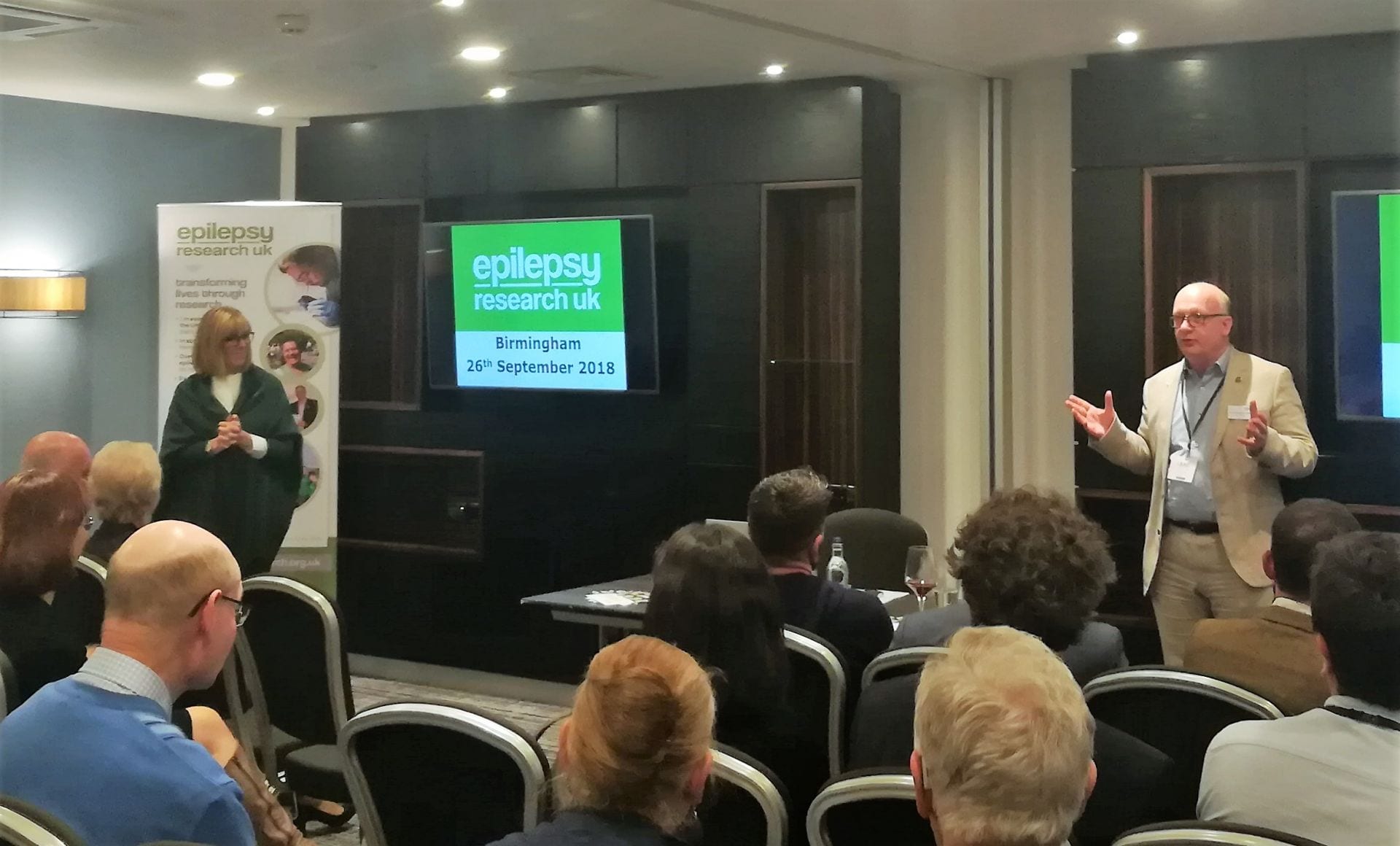 It was an inspirational evening, and certainly very informative! These events are a great opportunity to hear first hand all of the fascinating insights into the world of epilepsy research and we’re delighted so many of our supporters have been able to attend.Our sincere thanks to all of our speakers who gave up their time and to all of those involved in the organisation.