On Thursday 4 April, Epilepsy Research UK collaborated with The University of Edinburgh to host an event showcasing some of the ground-breaking ERUK-funded research into epilepsy being carried out in Scotland. The evening was hosted by Professor Mike Cousin and Dr Richard Chin, Co-Directors of the Muir Maxwell Epilepsy Centre, University of Edinburgh, who curated an impressive line up of speakers presenting their cutting-edge research.Professor Mike Cousin introduced the event and welcomed ERUK supporters. Professor Cousin told us about his journey with ERUK, which began with a £60,000 project grant in 2005 to investigate the role of synaptic vesicles in epilepsy. Since then, this grant has leveraged nearly £5million in further epilepsy research funding, and has enabled the team to further employ and develop sixteen researchers, and most importantly, increase understanding of synaptic vesicles and their role in epilepsy. Professor Cousin is now the Chair of Neuronal Cell Biology, Head of Pre-Clinical Research at the Muir Maxwell Epilepsy Centre. He is also a member of Epilepsy Research UK’s Scientific Advisory Committee. 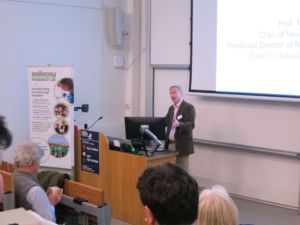 This was followed by the first of our speakers Dr Alfredo Gonzalez-Sulser, our 2016 Epilepsy Research UK Fellow. Dr Gonzalez-Sulser’s research investigates the use of optogenetics in temporal lobe epilepsy. Optogenetics is a cutting-edge technique that allows the seizure-generating activity of cells to be controlled using light. It is a highly skilled method that could lead to innovative treatments for epilepsy in the not too distant future. 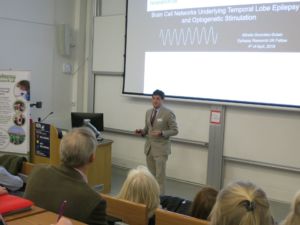 Professor David Wyllie, who was funded by ERUK in 2016, was up next; and told us about the work he has been doing with ion channels. Professor Wylie’s group has been investigating mutations in a gene called GRIN2A, which can make individuals more susceptible to epileptic seizures. However, the mechanisms that underly this are not clear. The ERUK-funded project aims to provide insights into neuronal communication in the hippocampus. – which is a trigger-site for the generation of epileptic seizures. 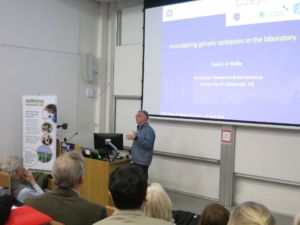 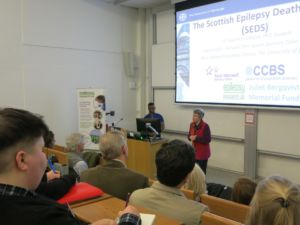 Finally we heard from Clinical Academic Professor Sameer Zuberi from the University of Glasgow, who has been investigating the genetic causes of childhood epilepsy in Scotland. Professor Zuberi’s study used new genetic testing technologies on children under the age of 3 years, with the aim of improving the diagnosis, and subsequent treatment of childhood epilepsy. In 23% of children the researchers found a previously unknown genetic cause. For 80% of these children, this diagnosis changed how their epilepsy was managed, onto a treatment that was specific to their genetic epilepsy. This is known as precision medicine. 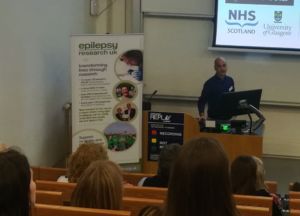 The event was rounded up by Dr Richard Chin who praised each speaker about the innovative work each is undertaking.  He remarked how important the collaborations are throughout the epilepsy research networks, and how ERUK is integral to this. In turn, each and every supporter makes a huge difference too and by supporting ERUK you are directly supporting all the work the researchers do. 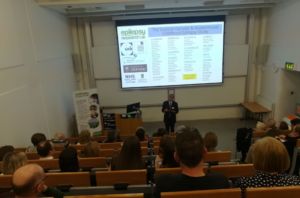 Our guests then had the opportunity for a rare glimpse behind the scenes as the Muir Maxwell Centre granted special permission for a guided tour of the epilepsy research laboratories. The tour of the laboratories rounded off an incredibly insightful and informative evening. 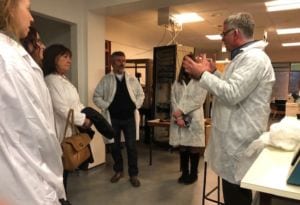 Our sincere thanks to all of our speakers who shared their work and spoke with supporters and for Professor Mike Cousin and Dr Richard Chin for developing such an inspirational programme of presentations. A special thank you to Jane Haley and all the volunteers from The University of Edinburgh who supported the event and were key to making the evening such a success, and to our supporters without whom this research would not be possible.