Donor reception at No 11 Downing Street to announce 2016 grants.

Prime Minister David Cameron was a very welcome guest at Epilepsy Research UK’s annual supporter reception, where he spoke movingly of his own experience as a parent of a child with epilepsy. The event, held at No 11 Downing Street on Monday 16 May 2016, was hosted by Under Secretary of State for Life Sciences, George Freeman MP, and marked both Epilepsy Research UK’s 25th anniversary and National Epilepsy Week.The evening was an opportunity for the charity to thank some of its donors for their continued dedication, and to give them the opportunity to hear first-hand from this year’s six new grant awardees. Dr Graeme Sills, Chair of Epilepsy Research UK’s Board of Trustees, emphasised Epilepsy Research UK’s commitment to supporting their studies, which will be vital to furthering our understanding of what causes epilepsy, its wider effects on quality of life and how it might be more effectively treated in the future. You can read about the grants here.The charity was also delighted to introduce its new Ambassador, Jonathan Thomas, ex Welsh Rugby Union International, who has generously offered his support.Dr Sills commented: “2016 marks our 25th Anniversary but there is still much to do to build on the advances of the past 25 years and research remains central to our vision of a future without epilepsy.  It gives me great satisfaction to see the positive effect that our research investment has made in a number of areas that are now beginning to have an impact in everyday clinical practice.Epilepsy Research UK may be a small player in the global research field but it has a successful track-record of funding the people and the types of projects that are currently at the very forefront of research into the causes, treatments and consequences of epilepsy. We have an obligation to those whose lives have been touched by epilepsy to continue that vital work.” 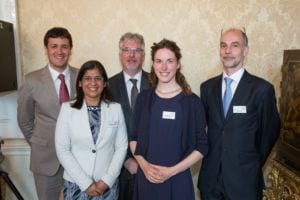