Angus MacDonald is fundraising for Epilepsy Research UK. Angus, whose sister has epilepsy, has decided to cycle from London to Paris in June 2017 to support our research.Angus says, “ My sister Sophie was first diagnosed with epilepsy 6 years ago, when she was 22. To be honest, I’d never really known much about epilepsy until then and witnessing that first  seizure was a frightening, emotional experience.I’d do anything for Sophie, so realising the lack of awareness around this condition and how many people it affects, I wanted to make a stand and raise awareness as soon as possible. I jumped at the chance both to challenge myself and raise money along the way so I did the London to Brighton cycle ride. I’m now taking this further by attempting the London to Paris one on June 1st this year.Since Sophie was diagnosed, it’s obviously had a big impact on the family – we’re very close and, as with anyone you care for and love, there’s always that worry. However, we don’t let it affect our everyday lives – my sister wouldn’t want it and it’s important that it doesn’t define your life. 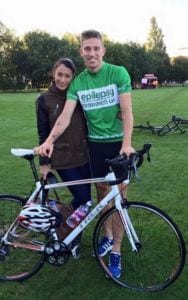 I was made aware of Epilepsy Research UK through a friend and, by reading through social media posts and all the news on their website, I made a decision that this was the charity I wanted to support; I’m now raising awareness and funds in whatever way I can.I would say to anyone out there that suffers with epilepsy, don’t be afraid to come forward and talk to people about it. I’m lucky to have a fantastic bond with my sister and we love each a lot so putting the effort into this and raising money for research just makes sense to me and is easy to do. “Angus has set up an online sponsor page, and has already gained a huge amount of support via twitter!  If you’d like to support Angus in his fundraising you can do so here.Our huge thanks go to Angus and his family for fundraising for our research, and we look forward to supporting him in his London to Paris cycle.