The ERUK team travelled to Gaydon in Warwickshire on Saturday 22nd September to attend the members briefing in advance of the start of their challenge which will take place over the weekend of the 5th – 7th October.  Around 200 people attended the session where the charity was asked to make a presentation on the work that we do and the advances that have been made over the years in our understanding and treatment of epilepsy. 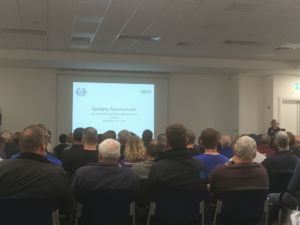 The Club Triumph Round Britain Reliability Run is a biennial event and is now in its 26th year. Over the weekend of the 5th – 7th October, more than 140 cars will set off from Knebworth House, Stevenage, to begin their 2000 mile, 48 hour non-stop trek around the country. Crews consist of 2 – 4 people, so that’s up to about 400 people in total, as no overnight stops are allowed, so one team member drives while the other(s) sleeps. As one of the participants says “It’s a completely bonkers thing to do in this day and age and I can’t really explain why I have been taking part since 1980 …. There is no other event quite like it.”Every time the run takes place, the event supports a different charity and this year it is Epilepsy Research UK. The charity was nominated by the widow of Martin Randle, a former event organiser who developed epilepsy a few years ago and sadly passed away over a year ago due to his condition. It is in his memory that money is being raised for our charity. 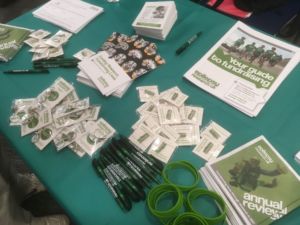 There was a palpable excitement in the room as the attendees were taken through the route and given hints and tips on what to look out for and how to navigate tricky areas. Unbelievably some of the classic cars taking part are still under-going work to get them ready for the big event!Over the course of the morning we met an enthusiastic bunch of classic car enthusiasts: some who had completed the course 22 times to those who were doing it for the first time. In the audience was an elderly gentleman who had been one of the team who had initially dreamed up the idea all those years ago. Let us hope that it has many more years to run. 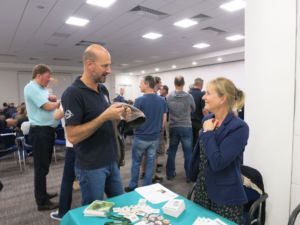 Thank you for inviting us to your meeting, it was lovely meeting you all. Good luck to you and many thanks for pushing on with the fundraising.  And if anyone would like to donate then you can do so here: